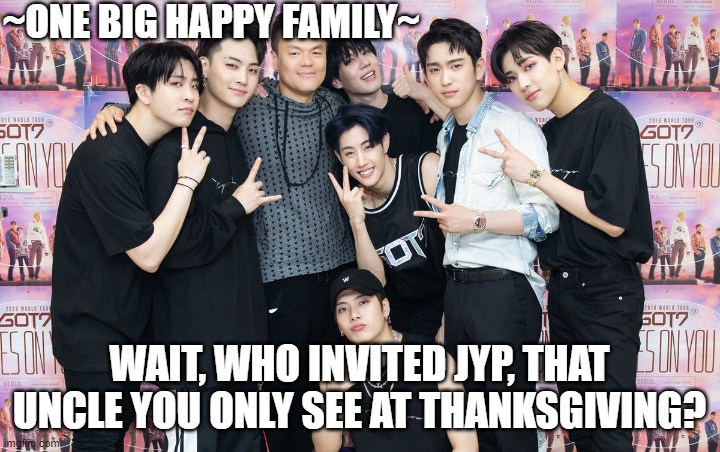 3AM Thoughts, OpinionLeave a Comment on 3 AM Thoughts: Companies, or really CEOs, aren’t your or your faves’ friends

Now, everyone and their mother has heard of GOT7’s imminent departure from JYP by now. Even me, who has been living under the rock that blocks out K-pop has heard about this through the grapevine that got through the cracks of said rock. At first, I felt sorry for the fans based on a couple comments I read since, you know, it seemed they’d be breaking up after leaving JYP. However, I go to YouTube and see this:

I think you get the picture. Basically fans are rather rejoicing over the good news as if they’re Christians and the second coming of Christ has been confirmed for next Tuesday. Everyone seems pretty spanking happy that GOT7 are leaving the hands of the treacherous JYP and his (literal) cult.

Admittedly, I didn’t know much about GOT7’s situation and their apparent mistreatment by the hands of JYPE until the news break out and being the lurker I am, browsed sites like Asian Junkie. A friend of mine also informed me of more misdeeds done by the company and JYP himself and I must say…it’s no freaking surprise GOT7 left as soon as they could. It really sounds like a frustrating teeth gritting situation that the 7 had to endure. I still don’t know the finer details but I know enough to write up a short post like this to say: Why do fans still think companies and their CEOS are buddy buddies with their idols and vice versa?

It may appear like the CEOs or heads of the companies cherish and adore their idols but it is still a boss-subordinate relationship. Idols are the moneymakers of the company. They are the breadwinners. Yet, unlike the traditional breadwinners of the house, they’re more like a 1950’s housewife shackled to the stove to make sure her dear husband is well fed even if said husband is an abuser, a gaslighter, a floosy or some other terrible thing, the poor housewife has to smile and bare it all while telling those nosy neighbors that “Yes, her dear husband is the bees knees and loves her dearly.” Yes, your faves, all of your faves rather they’re A-list celebs like BTS (whose fans really do seem to have a “We stan the CEO” problem) or nugu groups like Wei. And yes, I did call all your faves housewives.

Apparently, JYP was one of the better CEOs in the industry and was probably next to Bang Shi-hyuk (CEO of BigHit, BTS’s agency) in terms of having that benefactor CEO image. Hmm, now that JYP has been exposed to be a shite CEO to the more oblivious ahgases, how long will it take for the more oblivious ARMYs to realise CEO Bang ain’t the benevolent father of BTS that they all believe he is…? I’m not really holding my breath.

Anyways, I got sidetracked, point is, JYP did actually have a reputation of seeming close with his idols even if they had disbanded/left the company. In addition, a lot of said idols spoke highly about him as well. Yet, I guess they would if they didn’t want to be blacklisted by him as he did with Jay Park.

I’ve also learned that JYP really loves cockblocking the release of his artists songs from Sunmi to Baek Yerin to JB (GOT7) while at the same time not permitting his idols to do outside activities like Mark (GOT7 as well) and acting. It seems that those who do leave JYP apparently do flourish or at the very least feel more freedom like the beforementioned Sunmi and Baek Yerin but also Baek A Yeon, Kim Yubin (former Wonder Girl), and undoubtedly the 7 members of GOT7 when they are granted that freedom.

Honestly, why did anyone think JYP was this great father figure anyway? Man is pretty creepy to me. And this is coming from someone who has a very poor judge of character.

But seriously, when he’s making videos lusting after girls who were in their nappies when he was probably hitting the books in college, I can’t quite see you in a wholly good light, my dude.

Oh, and I don’t know how you guys feel about cultural appropriation and all that jazz (as I myself am still coming to grips with it), there is also this tidbit from his past:

You know, I really learned that through the good things like giving idols like Mina anxiety breaks and seemingly caring for their idols’ mental well-being all while appearing to be a kind father-figure to his idols is just plain performative. Remember, it’s not just idols who have to upkeep their image amongst the public and their fans. Companies as well really have to trick us, the fans, into believing that they’re on our side. And unfortunately, enough of us fall for that schtick. Or we turn a blind eye in favour of our faves because even if they have crappy CEOs , we still want to support our idols, right? I don’t blame anyone who falls into the latter category. This post was more for bringing awareness to stop treating the CEOs and heads of companies like they’re our idols friends and our friends, too. They do NOT work in our interest or our idols’ interests but in the interest of themselves and those people who buy their stock or whatever.

Basically, it’s about money in the end. A reason as old as time.

So yeah, that’s about it. I feel like this post was a whole lotta nothing and pointed out the obvious. But you best believe there is enough fans out there that don’t care at all what their companies do to their idols as long as they still receive content and “love” from their faves. It’s a bit sad honestly? Fans have more power than they realise but even then I wonder how much difference it would make in the long run. Besides JYP, Bighit seems to be the company adored by fans, but I gotta wonder why? Beneath the surface, Bighit ain’t that much different from JYP and it doesn’t help that the CEO of BH worked in JYP for a while before forming his own company. I guess one could argue, well, BTS resigned for another 7 years, so the company and the CEO must be doing something, right and anyways, the boys all love our cuddly wuddly Bang – they said so themselves.

Time to bust out the old gif:

Look, I could go on but these posts are supposed to be short. I will leave off with two more videos for your viewing pleasure. This one details a bit more of the terrible horrible no good misdeeds JYP made his current and former idols go through:

And this last one is another JYP video that basically disses not just GOT7 (though they are specifically targeted in the beginning) but current and previous gen idols who ever dared do aegyo and acted cutely innocent. MAKE SURE TO PUT ON SUBS~!

And with that, I bid you adieu~