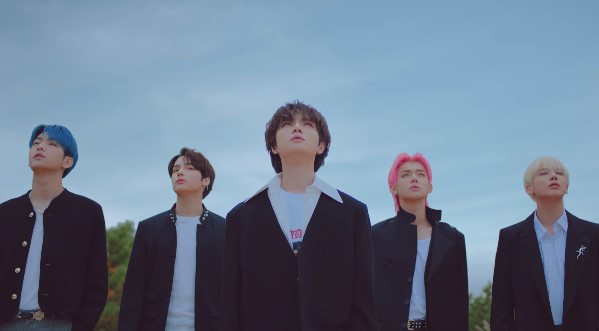 As per the title, I’m on K-pop hiatus again because I swear this genre wears me out every few months and I need to take breaks for my mental sanity. The only posts that will come from me are these “review” posts for the indefinite time being. Nothing else because I can’t muster the time nor energy to deal with anything else. So, I’m going to be outta the loop with the happenings and going ons with K-pop for a while (not that I think I’ll miss much honestly).

With that noted, let’s just get on with the music which is what you came here for, right?

The chorus is a bit of a mess and it starts rough but the melody is doing some (some) interesting things I like. Kinda disappointed in ONEUS – this could be better.

I thought I hadn’t reviewed the Korean version so I had left this in, but whatever. This song has actually grown on me since then so I actually kinda like it.

A pretty typically Korean to English song that doesn’t quite match up to the original namely due to the slightly awkward and cringe lyrics. Plus, I didn’t really like the original anyway.

Does this feel like it’s missing something in the melody? It feels that way to me especially outside of the chorus. Because of that, I feel ambivalent towards this song.

A pretty average girl group song which is neither bad nor good. It’s cute but the way the girls stare and smile at the camera kinda creeps me out a bit

Ehh, I only really liked Tablo’s part (if he is the sad bloody dude in the beginning). CL is only doing some RnB chorus that’s not so hot while we don’t talk about Zico cause I personally don’t really care for the guy.

This is more plain RnB with some rap sprinkled in for a bit of spice. I like this song a bit better than their other song but that ain’t saying much honestly.

This song kinda reminds me of the AB6ix song up above. The melody seems alright to me but it feels like it’s lacking something. Too bad I’m not a technical music nerd to pinpoint exactly what that is…

I discussed on my stream how this group really went from Dreamcatcher 2.0 to this cute soft girl concept with a video that is clearly lower budget. I sincerely wonder what happened? I know the dark concept doesn’t always sell well (DC are exceptions) but whatta shame – was hoping for more girl groups with darker concepts.

BERRY GOOD – Time for me

I liked this song better than the last two girl groups – good on Berry Good.

It’s songs like this one where I just know as soon as the vocals kick in, but I still wanna give it a chance but each time, they still fall short.

Dude is as bad as Yerin Baek with the long intros. Though the song, when it finally starts, is alright, but still not my cup of tea.

Has strong indie rock vibes that I usually would groove to, but this isn’t really doing much for me.

Dark Moon – Getting colder, getting darker

Only realy kept this in because I had already nuked like two songs before it and couldn’t just keep doing that. I respect the ballad but don’t really endear to it like that.

I only looked into this one cause I say Park Seo Joon wan wondered what kinda song and video this was gonna be. Then surprise, that one girl from BOL4, Jiyoung is also in this. Song is average, by the way.

Moonbit – I wished you loved me

It’s a ballad…that’s all, but at least it’s short.

FEELY – Found you on television

A retro song reminiscent of the ’80s and not in a so great kind of way.

I believe this is a cover of a previously well-known song by a Kim Jongkook (of Running Man fame). Hence, I actually kinda like this one since back in the day I listened to the original here and there.

Another Gfriend girl, nice. It’s along the lines of a typical OST ballad, however, so not much to say here.

I’ll just say I pass on this one.

That’s it for this week, ladies and gents. Catch you next week, I guess. And hopefully we’ll have more head nodding songs (maybe – K-pop is unpredictable).