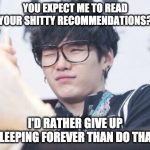 This is definitely a reading list I felt the need to type up since I wanted to share the sites that I love, wanted to recommend, felt inspired from and/or helped me create the content that I do on this little website of mine. I also will most likely add some research papers and news articles, but only if they actually are worth the time to read since those things can be really unnecessary with the fluff of information and difficult words used.

So far, the list is short since I’m a busy college student who is forced to read the required boring reading for my classes, so I can only recommend a few. However, I will definitely add more to the list as time goes by, so be on the look out for updates! If interested in any of the sites, please click on their logo or profile picture to take you to the site.

So this is basically the site where I get pretty much all my K-pop related news. I remember back in the day when I first got into K-pop, I would browse sites like allkpop and maybe Soompi. Thankfully, I stopped bothering to go on allkpop some months afterwards while Soompi is alright for the occasional article or two. For whatever reason that I’m sure you would never guess, I never really touched Koreaboo and to this day it has stayed that way.

However, Asian Junkie’s alright in my book. Most articles are by IATFB but most people just refer to him as Asian Junkie from what I’ve seen in my stint of about a year surfing his website. The way he tells the news is quite candid and refreshing and not in a pandering way as some sites (read: Koreaboo) tend to do, particularly with bigger groups like BTS, EXO, TWICE, etc. etc.

So yeah, check him out. I would also recommend the Bias List. He is a regular contributor to the site and seems like an alright guy as well. His articles are reviews on the latest K-pop songs to hit that week but his main platform his is own blog with even more reviews not find on Asian Junkie. I’ll be honest, that I haven’t read his blog at all, but I have read a review or two of his on Asian Junkie.

Dude, what can I say about this cunt? I guess I could start off with that the fact that he is definitely an inspiration to start off this blog of mine so there’s that. Honestly, I gained some amount of confidence in starting up this blog do to whinging about it on his monthly Q & A posts called Qrimole. Besides that, it is a pleasure to read his blog weekly and learn more and more about K-pop than I’ve ever learned anywhere else. I’ve only been following his site for about a year now, but I hope to continue to do so until he either stops blogging or the day I die whichever comes first.

Anyways, I completely recommend his blog if you’re interested in learning more about the inner workings of K-pop BUT I warn you, the dude does not sugarcoat things nor does he pander to any group (you can see that in his weekly roundups where he reviews K-pop songs. I kid you not, he probably shits on like a good 75% of songs each week…probably more). If you don’t like cursing or the more fappable side of K-pop, I’d avoid this site as well if you can’t handle. Personally, I’m don’t look at idols sexually like that (although some eye candy is pretty nice once in a while), so his boob posts and similiar ones aren’t really my cup of tea. Still, I can’t recommend him enough, so if you’re ready to tackle on the challenge of becoming so depressed with K-pop and the capitalizing exploitative industry that your enslaved faves work under, why don’t you head over to his blog for a good time, eh?

Recommended articles to crush your rosy view of K-pop and your lovely oppars and unnirs:

And my personal favorite:

The dude also does fanfics as well which I, a “seasoned” fanfiction writer appreciates:

Hyuna and The Good Fan (Inspired my Jungkook Imposter Post)

Right, so this entry may be a touchy one for some ARMYs out there, but I honestly really like the gal who owns this blog. I have Kpopalypse oppar to thank for introducing me to Infinitely Inspirit SY or better known as AustralianSana on Twitter where she is far more active…or at least she was until ARMYs successfully closed that account through mass reporting. On the other hand, her blog is admittedly not as active but give her a break. The girl was working her butt off in college and only recently graduated so props to her.

But recently, she has been writing up some articles up on Medium under the name E, and I highly suggest checking that out too especially if you’re a BTS fan who doesn’t get butthurt over some pretty sensitive topics among the fandom (ex: The Grammys, Saudi Arabia). If not, steer very well clear of her account. Though she has also written some great critique pieces on Hillsong, a megachurch more prominent in Australia where she is from. Admittedly, I haven’t really heard of Hillsong and unfortunately, I have been too busy trying to get my shit together so I haven’t read her post but I will. But again, highly recommended especially since it proved to be quite popular in her favor and got her recognition from some top people.

She has also definitely achieved some great things as a BTS fan and yet she is constantly harassed on Twitter and was even witch hunted after having to come out as the owner of TATAdventures (which is a cute Twitter account showcasing the daily life of TATA, a BT21 character created by BTS’s V). Recently, she appeared with her Tata on Australian TV on a show called Hard Quiz which even garnered enough attention for Naver, a very prominent Korean web platform, to write up an article about it.

She even had a hand in helping the production of BTS’s Danger since she recommended them to a music industry professional who wound up bringing in a songwriter to BigHit to help finish the song.

I’m not jealous, I swear…but really, she’s definitely an A in my books. I also like her because she also helped me feel better about liking BTS because recently the fandom has been a mess and even the boys have become more superficial for me. Yet, her candid attitude and informative stance on matters pertaining to BTS makes me have faith that not all is lost with BTS and the fandom (well, maybe just with BTS).

(IMPORTANT! Offers her side of some “Anti-BTS” tweets some outed her for along with showing how she’s more of a real (or at least more rational) BTS fan than a lot of others)

I’ll be honest here. I missed the bandwagon on this site. I’ve only been really into K-pop circa 2015 and only really started reading blogs on the regular since last year. The same year that Anti-Kpop Fangirl stopped writing and bid a fond annyeong to his loyal readers. Granted, the site is still up or it wouldn’t even be on the list, so I’m recommended it to all my dear readers out there.

Again, similar to the Bias List, I haven’t read a whole lot on this blog. I do remember reading a fanfiction AKF collabed with Kpopalypse in writing where Lee Soo man, the CEO of SM Entertainment, at one point came in with an AK47 or something to shoot at the Fx girls or whoever, so that was fun. I also stand by with one of their ideology of basically dragging and making fun of antics that happen in K-pop and the idiotic fans that go along with it.

Honestly, if they hadn’t used the name Anti-Kpop Fangirl, I would’ve loved to use it, but I’ll be damned if I could’ve done a better job at running such a blog with that name. I’d put it to shame. Nope, I’ll stay Kpop’s Lost Fangirl cause I’m still quite lost and confused on what I’m doing, but please stay with me for the adventure, my one reader.

So I’m fairly new to this girl’s blog but I still felt like I had to feature her up here for a few reasons. One, I had seen her floating around the interwebs from Kpopalypse’s blog to Asian Junkie’s site and found some of her comments pretty funny. Her name is quite amusing as well.

Second, during a Kpopalypse Twitch stream, he happened to be checking his Twitter as this valiant warrior right here was in a disagreement with another Twitter user about Jackson after someone accused him of acting like a thug despite fencing most of his pre-idol life. As someone who is as soft as a marshmallow and has the sensitivity of glass, I am always impressed when someone engages unreasonable and stupid fans on Twitter so hats off to you, dear girl.

Well, I ended up following her on Twitter right after that since I was impressed and whatnot and for whatever reason she started following me too. I’m flattered, but I wonder why when I’m such a dweeb.

I finally had time to check some posts on her blog. Admittedly, I didn’t read much but God, I legit found myself laughing at pretty much every post I read. Granted, I’m easily amused but I didn’t find her writing dry and find it natural and easy to read unlike my mess of a blog. At some point, I was thinking how neat it would be friends with this girl, but I’m an unlikeable loser so that ain’t happening.

Still, definitely check her out. She is very diligent about posting music reviews weekly (her biggest category to date), but I would also check out her other posts like her actor post which introduced me to the sass ball known as Choi Jin Hyuk (warning: she ain’t into kdramas like at all though), her bias list posts, especially the first as it introduces you to Mr. Car Door, and the problematic things her biases have done and no doubt remind you that your own bias has definitely done some questionable things.

Recommended Article: SA (A very educational post about Saudi Arabia written through the context of BTS’s controversial concert that took place over there)