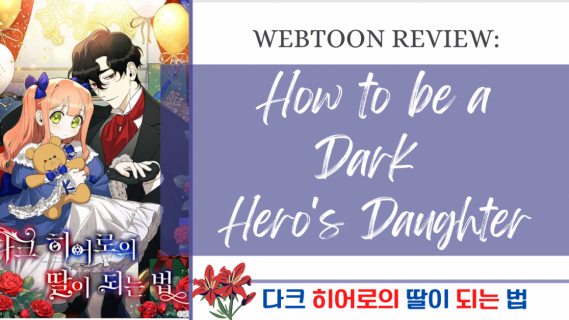 First Impressions, Opinion, WebtoonsLeave a Comment on How to be a Dark Hero’s Daughter [1st Season Review]

Tonight I bring a review on a more wholesome webtoon, “How to be a Dark Hero’s Daughter.” Despite the more wholesome family vibe this webtoon brings, please expect darker elements such as murder, poverty, and bullying. I mean, there is a “dark hero” involved after all, so it’s not all fluff and rainbows.

After dying tragically young from an illness, Yuna is reincarnated into the novel, “The Days of Duke Luwelton’s Family as Re, a 9-year-old orphan living off the streets. Memories of her past life and the novel come back to her when a chance encounter with the titular duke provides a chance for her to help him at the cost of…becoming his daughter?

Sounds like an excellent chance to leave her life of poverty for that of nobility but there’s a catch – the duke is a serial killer. To clarify, the duke is a dark warlock cursed with the ability to live only if he kills people. He works as a weapon for the royal family hence he is technically a villain who kills villains.

And after helping him catch a criminal, Re is adopted into the duke’s family and given the name Letitia. What is next for our poor Letitia when her new father is technically the bad guy? Wait, he dotes on her and spoils her? Not only that, but he calls her his “baby” and “the cutest in the world”? Maybe life with a cursed duke won’t be so bad after all.

At the time of writing this, this webtoon actually is on hiatus as I’m guessing the creators are prepping for season 2. Look forward to that if you read the brilliance that was season 1. As for where to read it, I tried looking around but couldn’t find it anywhere legally except for Kakaopage and that was the webnovel (I’ve never read it, so I can’t comment on it).

Strangely, when I put in the Korean title in Google, the Kakaopage for the webtoon would skip to the main page of the site, so not sure what’s going on there. Guess you may actually have to read this one on a third-party site.

However, you can also support the ones translating this webtoon by visiting their website, sugarbbscan.com.

This girl is as sweet as she looks and is a precious bean. Her looks aren’t the only thing that’s sharp however. As more and more memories of story events come back to her, Re does her best to help the duke investigate and bring criminals to justice even if it endangers her. As a former orphan, she is anxious about fitting in with her newfound family and hopes that the duke won’t cast her aside when her usefulness runs out.

(Her name Letitia is given to her a bit later in the story so that’s why I call her Re above).

This man is our dark hero and the duke who is basically labeled a serial killer due to his needs to kill to live. At least he is killing actual bad guys, am I right? Anyway, Callen is the highest-ranking dark warlock in the story thus is used by the royal family to snuff out the bad in the country (region? I’m actually unsure). In addition, Callen has a pretty awful past himself that led him to be a rather unaffectionate and callous man himself before Re comes along and challenges that.

I’m serious, this man really has no idea how to handle children or affection sometimes (read left to right):

His face in the last panel is dangerously priceless.

Fun fact: The picture I chose for Callen above is right after he pretty much whacks a man to death with his cane. The man was a criminal he was hunting down so it’s okay…sorta.

Jade is the 14-year-old son of Callen. The two are in a rather cold relationship as they don’t show each other much love or affection, but it’s not like they hate each other either. Like father, like son – you can think of Jade is a mini Callen if it’s easier to remember because the two of them are pretty similar in personality and looks. Which means he becomes an utter simp for his adopted younger sister which is honestly real cute to see.

The butler who words the Luweltons. He is a pretty chill dude who is fully aware of what Callen does and helps him accomplish his work. He is an earnest in his own work and dutiful. Not much is known about his past except that he has an education that surpasses the normal butler and that he was raised in the temple. He is also overlooked by readers in favor of Callen and Jade (and I can’t blame y’all, but pay attention to Xion, too, please).

Mariane is Callen’s beautiful little sister. Thus, she becomes the aunt of Re/Letitia and boy, does she play the part well. Doting like her brother, her first acts as aunt is to take Re clothes shopping and basically pamper her. In contrast to her dark hero of a brother, Mariane is a Saint at a place called the Temple, but you would be forgiven for not being able to guess that. She also has a lot of readers wanting to be stepped on.

The art in this webtoon is a favorite of mine as well. Again, “Once Again Into the Light” beats out still, but I am a bit more endeared to the art style of this story compared to “The Male Lead is a Murderer.” Plus, I just find the men in this story to be more eye candy for me cause I like those natural black-haired leads (and with red eyes!). I’m basic, I know.

Looking really great so far! I’ve read up to the end of season 1 and I will be eagerly awaiting the start of season 2. I might give it some months though before I truly start reading it because of the way webtoon releases work. The story remains solid to the end and we’re introduced to the true bad guy of the series because it can’t be Callen, of course. Plus, there is still more mysteries to be solved including the one that still haunts Callen to this day.

But more importantly, there is still a demand to see more family moments between Leticia and her adopted family. I look forward to seeing that and more once season 2 drops.