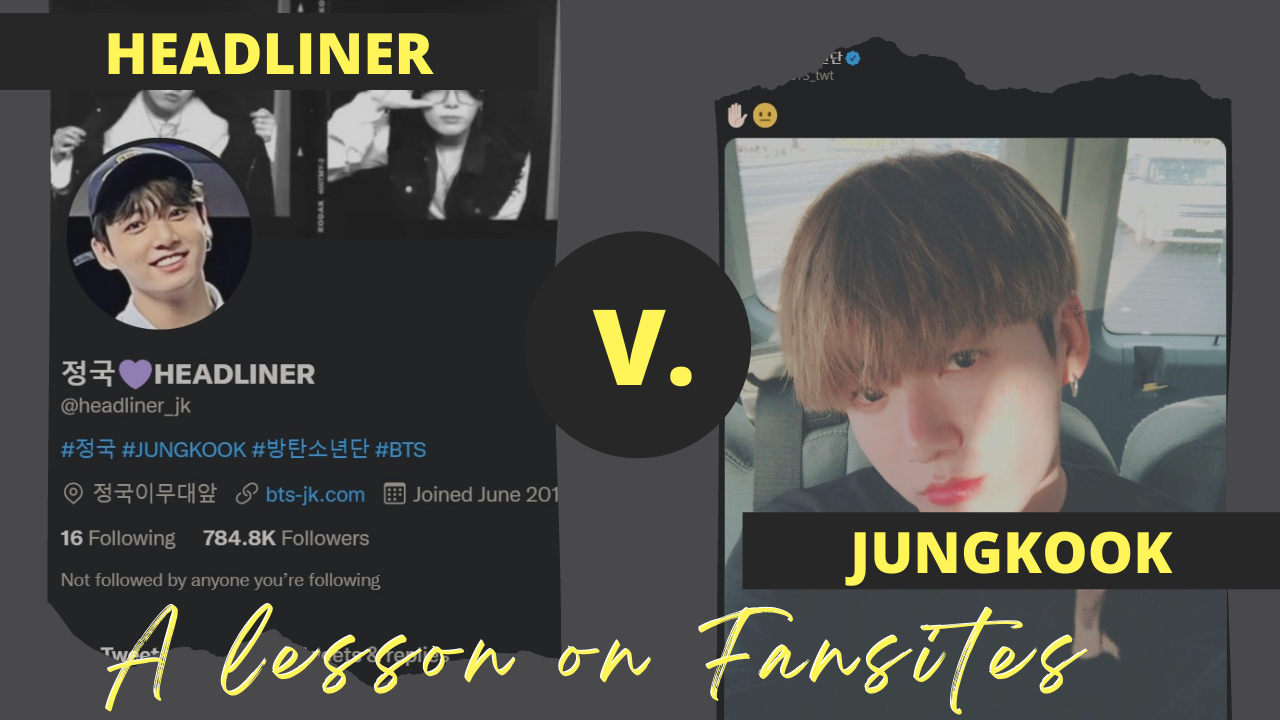 A Lesson on..., BTS, Informative, Opinion1 Comment on A Lesson on Fansites: Headliner v. Jungkook

[March 9, 2022 update: I just edited for clarity and updated some links and the header image.]

So I got interested in the concept of K-pop fansites after I saw this video of BTS’s Jungkook looking pissed af floating around my Twitter timeline a while back.

I had never seen this video before nor had I seen JK looking so upset, so the obvious choice was to do a bit of investigation.

For quick context, this took place all the way back in 2016. BTS is performing “Fire” which is one of their more upbeat get hype songs so being that serious doesn’t really fit the performance. Yet, it looks like the comments under this video didn’t care or perhaps understood?

Here’s more because I couldn’t resist. This is literally the kind of comments I saw even among the most recent.

After bouncing back and forth on what to even add in this post for a few months, I thought it would be best to finally sit down and just see what my fingers type out. I pray for it not to be too incoherent of a mess, but I wanted to share with you what I learned. You all can be the judge on these fansites centered on the one that piqued my curiosity in the first place – Headliner.

Contents hide
1 I. Who is Headliner? What is her relationship to Jungkook?
2 II. What exactly is a fansite or homma (홈마)?
3 III. Okay, but aren’t they all just like Headliner?
4 IV. Be a Pashu
4.1 Related Posts

I. Who is Headliner? What is her relationship to Jungkook?

I learned Headliner is a very prominent Jungkook fansite and has been following the Golden maknae around for about 7 years now. At least according to the below post she put on Instagram:

Okay, so all I knew about fansites were that they were usually girls who went around following idols to their airport and some schedules like music shows, concerts and whatnot to take aesthetic looking photos that us common fans wouldn’t be able to take on our 3rd rate iPhone 6ses. I speak from experience if you’ve read any of my previous posts at K-pop events.

Yet, apparently there is a major debate about fansites and the line they straddle between being photographers that sell and distribute easily accessed high-quality photos of your fav idols or being just plain sasaengs.

This brings us back to Headliner who I’ve seen get an immense pouring of hate in the past. The catalyst seems to be from a Jimin fansite, Jimin_bcd, who released texts of Headliner basically badmouthing Jungkook to a disturbing level back in 2019. I won’t add all but I will link to where you can read the other texts here (this is a one minute video but you only need the first 45 seconds).

I mean, obviously not a good look, right? Apparently she’s also been accused of overstepping her boundaries and showing up on unannounced schedules which is a big no no. For her part, she has taken responsibility for the texts above. She has also addressed the accusations of showing up at unannounced schedules. Mind you, the comments in the last linked tweet were supportive of her, but that was back in 2018. It’s up to you to decide what to make of all this.

However, she’s still in business despite ARMYs totally hating her and crying out to BigHit to do something about her. These cries fall on deaf ears which is weird considering BigHit literally has a blacklist for sasaengs and fansites that they put out back in 2019.

I surmise that the only reason she isn’t blacklisted is because she is a good marketing tool for BigHit to use in promoting Jungkook without having to spend any extra money. Sounds a bit ludicrous, I know, but hear me out. In one video that I’ll introduce further down in the post, one former homma summarized the job as being “agents of marketing.” She explained that a well taken photo of an idol can basically go viral and bring in more fans into the fandom.

To be honest, fans who are drawn in by the visuals alone is a mighty big number in the K-pop fandom as many would be ashamed or embarrassed to admit. Nothing to be ashamed about since that is one of K-pop’s biggest priorities – to have handsome and pretty idols that draw you in. It’s literally an idol’s job to be attractive 24/7. As a side effect of this, fansites or hommas flourish in this type of environment, but that includes not just the good but the bad and ugly.

So, where does that leave us? Are fansites simply sasaengs trying to slide into oppars dms? Or are they just some ladies trying to make a buck doing something they love? Understandably, Headliner definitely does not account for all fansites. I surmise that the only reason she is still around and hasn’t gotten the chop from BigHit is because of the factors I discussed before. It helps that she’s considered a “top seed” or mega-popular fansite for Jungkook (whether he and his fans like it or not).

In all seriousness though, after looking into her, I went on a slightly deeper dive. I wanted to form my own opinion of fansites then what I had just heard through the grapevine so I did a bit more research. Let’s dive in together, shall we?

II. What exactly is a fansite or homma (홈마)?

Based on the below video (which I recommend watching, by the way, if curious), the definition of a homma is someone who runs an idol fan site. Their main job is to take and upload the idols’ photos on their personal fansite.

Homma is short for “homepage master” which is in reference to when hommas were largely based on their own websites before taking to social media like Twitter, Facebook, and Instagram. Many hommas are typically fans just like you and me, but make a hobby out of taking pictures of their idols and profit from it. Which is not entirely correct. Hommas tend to not make much of anything if they solely take pictures of their beloved idols. This is why so many prominent fansites tend to fall into the practice of selling their own goods. These goods can also include slogan signs, keychains, season greetings, photo cards, etc.

Fansites use their own photos for these goods, but the hommas interviewed in the above video mention that it still isn’t too profitable. Indeed, many hommas usually end up using the profits from their goods to aide in support campaigns like buying birthday ads for their fave idol or donating to a cause for their idol.

Photos of birthday ads I took of BTS’s Jungkook and Dreamcatcher’s Siyeon respectively.

In addition, hommas tend to work long hours as they can wait for ages at music venues for their idols to finally show up. They may have to follow their faves’ back to back schedules which can take a toll on their physical health and financial situation. Quite a few of the hommas appear to do this not for the monetary gain, but as a sort of badge of honor as they are able to share well-taken photos of their faves that bring in more fans to the fandom. One former homma said it filled her with satisfaction and it was sort of electrifying to see the responses and reactions their photos can receive by hundreds, maybe even thousands of fans like them.

It is a tough job to be sure, but one that many fans just feel happy to undertake for the sake of their faves who they feel should be spread all across the K-pop landscape.

III. Okay, but aren’t they all just like Headliner?

Simply put, no. Of course, there are way too many fansites across the K-pop spectrum to put them under the same umbrella as Headliner. Even I actually have some doubts that Headliner is a sasaeng. Many fans have the misconception that fansites are complete sasaengs, but after diving a bit here and there and looking into a couple of videos, I really do believe that there are good fansites out there. The ones that respect their idol’s boundaries and don’t cause a ruckus wherever they go. My doubts on Headliner is just based on speculation but I think she just sees her position as a fansite as a means to an end. I mean, despite having tweets like this:

Headliner has built herself up as this big and influential fansite of arguably the most popular member of the biggest boy group in K-pop. How is she gonna let that go easily over some ranting texts from 2018 or whatever? Granted, she definitely could have changed since then so maybe it may be too harsh to judge her so hard.

Though if it’s her presence that has him looking as mad as he does in the above video then I’m not sure how much he really appreciates her “love.” Perhaps he can see through that façade because as I’ve mentioned before, Jungkook is the king of appealing to ARMYs in BTS. He can tell the real fans from the ones who are just in it for the profit.

However, it is clear given the amount of fansites out there that there will be a few bad seeds. That’s a given. So if you’re the type that is really into scrolling through pictures of your favorite idol on fansites and like to take the moral high road and want to support those worth supporting then I would advise you to do your research. Personally, I feel cautious of most, if not all fansites but then I’m kinda a paranoid person myself.

IV. Be a Pashu

Though I would say that a man called Pashu, that Way who is formerly of Crayon Pop, interviewed on her channel seemed like a pretty cool guy who formerly did homma-like activities as a fan manager for her group back in the day. I recommend her video as well.

So take note any who may want to try their hand at being a homma.

Because who knows, you could be interviewed on your fave’s YouTube channel one day in the future instead of receiving the glare of death by your beloved oppar.

Or you could even marry him or her like SECHSKIES’ Kang Sunghoon’s fansite, Hoony World, did (though without scamming other fans of their money, please).

But more likely than not, you may just be accused of dating your dear oppar like one overzealous V stan, HI, back in the day and face the wrath of millions of jealous fans. Fun.

TL;DR Don’t be a Headliner, be a Pashu.

One Reply to “A Lesson on Fansites: Headliner v. Jungkook”