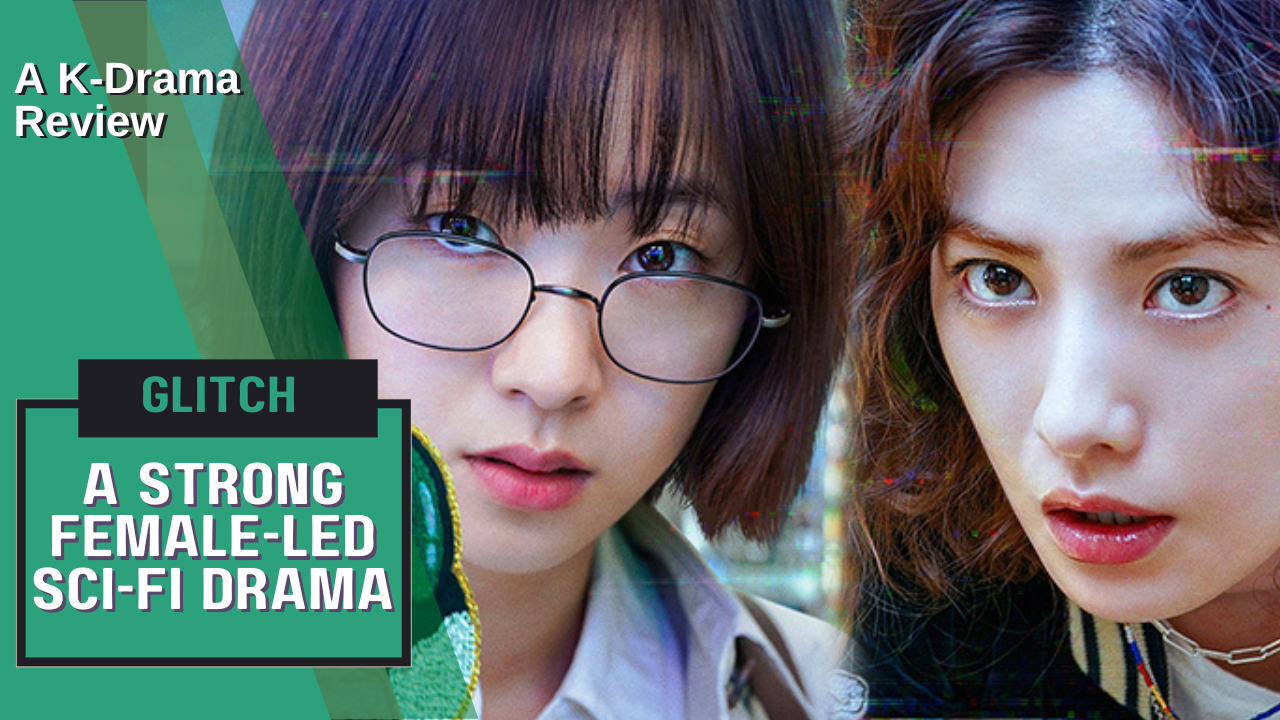 Earlier this month, Glitch, a sci-fi k-drama came out on Netflix and it was pretty good. I’m not going to lie, I was having a pretty horrible day and feeling awful so I put it on for something different (no romance) and ended up binging all 10 episodes of the show. Granted, I was probably watching it through my feels so perhaps I may be a bit biased but this is a drama I would recommend to those who enjoy sci-fi adventures, mystery and minimal romance.

Glitch is the story of Hong Ji-hyo, a woman who seemingly has a steady well-to-do job, a boyfriend who’s thinking of marriage, and pretty supportive parents. All in all, to those around her, Ji-hyo has a great life. There’s just the teensy little problem that she can see aliens. Thus, when her boyfriend ( really ex-boyfriend) mysteriously disappears the day after they break-up, Ji-hyo comes to the conclusion aliens took him. In order to search for him, she ends up teaming up with UFO alien enthusiast and former friend, Heo Bo-ra and with her help, the two uncover more than just an alien kidnapping.

I don’t know much about Jeon Yeo-been at all. She only debuted as an actress back in 2015 with the film, Treacherous, but really started to rise to fame with the movie, After My Death (2018) and dramas such as Night in Paradise (2021) and Vincenzo (2021). Jeon Yeo-Been is certainly on the up and up, so let’s see where she goes from here.

I think most K-pop fans know who Nana is unless you’re a young’in who just recently got into K-pop. Nana is most known for her stint as an idol in the girl group, After School, and their even more popular subgroup, Orange Caramel. Now, Nana mostly does acting, appearing in dramas such as  Love Weaves Through a Millennium (2015), The Good Wife (2016), Kill It (2019), etc.

Glitch only has a 6.2 on IMDB. I haven’t read reviews on it because more often than not my opinion is quite different from the majority of people. Guess I’m just easy to please. At first, when I started watching, I wasn’t too impressed with the alien as seen by Ji-hyo. It appears with its little baseball cap on in a convenience store when Ji-hyo goes to buy some stuff. It says nothing and just follows her with eerie eyes. We quickly learn Ji-hyo has been seeing this particular alien for years now, but always ignores it.

Interestingly enough, while the aliens are a central theme to the drama as you watch more and more episodes you quickly start to doubt whether aliens are really behind all the craziness that occurs in the drama. Indeed, in the midst of Ji-hyo and Bo-ra’s investigation, they find out that a crazy cult named the Church of the Divine Light is possibly behind her ex’s disappearance and the disappearance of others as well. Going even further in their investigation of this twisted cult, is the horrible realization that not only do they fervently worship a being based on the text of a woman who apparently was abducted by aliens, but that their Messiah is, you guessed it, Hong Ji-hyo.

I won’t spoil too much else of the story because I would suggest watching the drama yourself or at least reading recaps because it’s a pretty decent story. However, I feel the pillar that holds up this drama more than anything, even the story, is the dynamic between Ji-hyo and Bo-ra.

I found a pretty good article explaining why the two make such a great pair, but in my own words, I feel as if it was honestly enjoyable and satisfying seeing these two women grow in their relationship with each other once reunited.

The two of them became rather unexpected friends back in high school when Bo-ra caught the alien-obsessed Ji-hyo on the rooftop dancing like no one was watching. The two bonded over alien conspiracies and UFO sightings before a young Ji-hyo herself was the potential victim of an alien abduction and went missing for a few days. The two had a falling out soon after she was found after Ji-hyo believed it was Bo-ra’s fault for her going missing (because alien abduction, really?) although there is a little more to it than that.

Still, after the two meet again, while there is a very rocky start, Bo-ra and Ji-hyo end up relying on each other and playing up each other’s strengths in order to accomplish their goal of finding the ex and uncovering the truth of the cult. When they had no one, they had each other. When one was in trouble, the other didn’t hesitate to go after them. Honestly, their friendship is one most of us wish we had in real life. I mean, Ji-hyo practically handed herself over to the cult to give Bo-ra time to run away even after learning all the weirdness the followers got up to. Even if Ji-hyo knew she was going to be subjected to attempted brainwashing, forced surgery, and potential death, I believe she wouldn’t have changed her decision to save Bo-ra at all.

In the end, the two even decide to room together. Where their relationship will go from there is up to the viewer to interpret. For me, I’d like to believe they spend the rest of their days finding more conspiracies to uncover and solve for Bo-ra’s YouTube and streaming channel and just chilling enjoying each other’s company like the fine ladies they are.

So, if that all sounds good to you then I implore you to give it a try! It’s not perfect by any means, but I believe it’s an enjoyable watch for those who’re into sci-fi conspiracy cults and female-led dramas with two undeniably interesting leads that work off each other so well that it makes up for the “glitches” present in the rest of the drama.