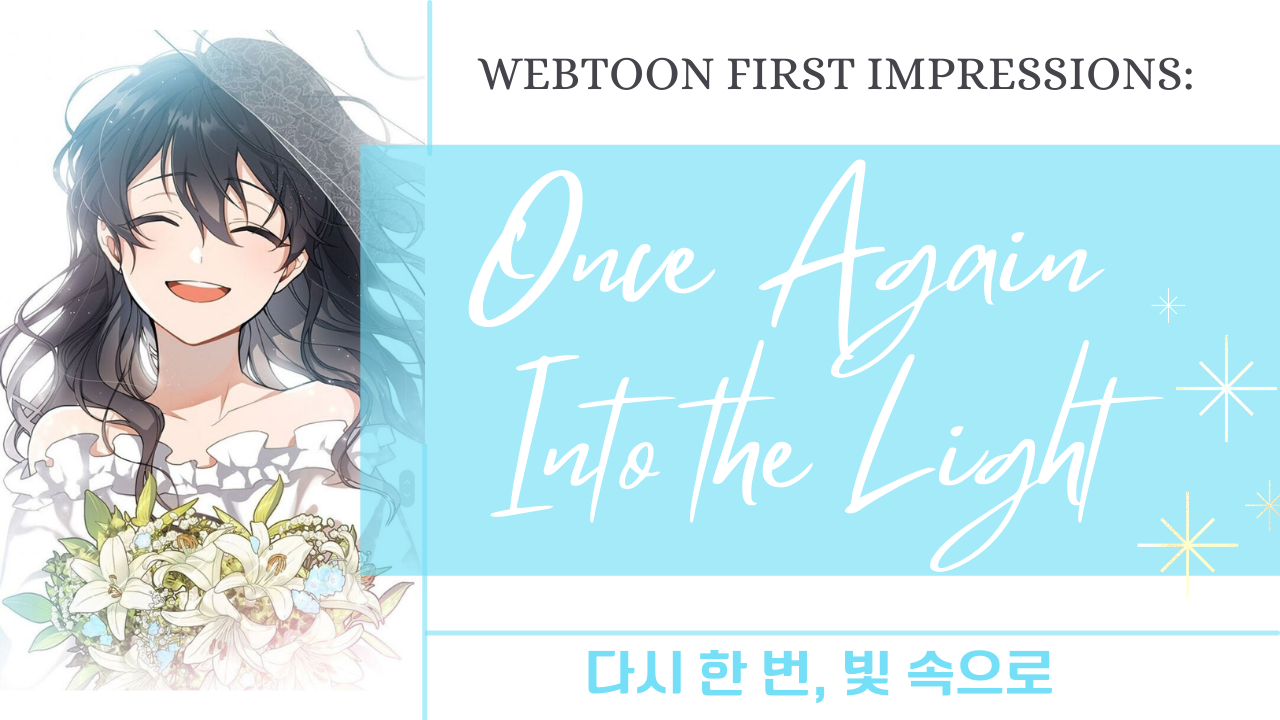 The webtoon I want to introduce today is a currently running one called “Once again Into the Light.” I picked this one for the first review because I felt it would be the easiest to go over and I wanted to start with a webtoon that I believe most people would like.

This is my first ever webtoon review for the site and I’m equal parts nervous and confused on how to do this, but I know I will improve with time. I do hope that these webtoon posts will appeal to some who visit the website. If any of you have any suggestions or recommendations then don’t hesitate to share since I’m fairly new to the webtoon circle.

I’m always horrible with summaries, so I will use the summary from animeplanet to give a brief description of the webtoon:

When Princess Alisa is framed for a terrible crime, she is shocked to learn that her own family wants her executed. Feeling defeated, she finds herself reborn as the princess of a rival empire. And though her new family acts sweet and kind on the surface, she’s not sure they can be truly trusted. Luckily, with this new life comes new power. But what exactly is this mysterious magic that awakens in her? And more importantly, can she use it to get vengeance against those who once betrayed her?

I think this is a pretty good spoiler-free introduction to the plot. Though I don’t think it does justice to the amount of frustration and sadness you may feel at the brutal unfairness of Alisa’s fate, but you’ll have to read to find out for yourself. I will add a bit more to the story through the characters in the next section so be aware that from here on out, there will be mild spoilers but nothing to integral to the plot besides the controversial main love interest.

The main protagonist of the webtoon and the unfortunate princess who succumbs to a plot against her. The young princess was only 14 when she is accused of the attempted murder of her younger sister, Marianne, who her family believed Alisa was jealous of. For her crime, she is put to death by beheading and is reborn as Alisha, the princess of the Elmir Empire, a rival to the Edenbell Empire.

The only princess of the Elmir Empire and beloved by her family, Aisha is the reincarnated Edenbell princess, Alisa. She retains her memories of her previous life and due to the trauma inflicted upon her by her previous family, does not trust or take to her new family in the beginning. Gradually, she warms up to them and accepts her new life surrounded by warm and kind-hearted people, but her past life still haunts her. Consequently, Aisha aims to figure out the truth behind the plot against her in her previous life and seeks revenge against those responsible.

Aisha’s father and the emperor of the Elmir family. Loving and caring to his family, but is also a capable leader of his country. Lost his first wife and married Iris.

Aisha’s mother and Isis’ stepmother. A sweet woman who wants the best for her family. She had a rocky relationship with Isis, her stepson, in the beginning of their acquaintance, but due to her diligent and kind-hearted efforts, the two grow closer. Very wholesome.

Aisha’s half-brother who adores her to the point I would not blame you for calling him a siscon, but more wholesome. He went through the pain of losing his mother, but thanks to Iris and Aisha, he is able to heal and become a loveable son and protective older brother. He is also the only one in the family who knows about Aisha’s past life.

The Edenbell Family (just the two who seem the most important)

The younger sister of Alisa. Marianne was the one who Alisa was accused of poisoning which led to her untimely downfall. A declared saintess of the Edenbell empire who everyone and their mother adores. She hides a two-faced vindictive personality behind that pretty face of hers. Presumably was the one responsible for turning the whole Edenbell family against Alisa.

The oldest brother of the Edenbell family. He supposedly had a good relationship with his sister, Alisa, in their childhood before he along with the rest of the family sent her to the chopping block without hesitation. He is shown to possibly be under a spell or brainwashed as his memories and feelings towards Alisa and her death are painfully ambivalent. Remains to be seen if if he’ll do anything redeeming to his character, however.

The son of a duke and Isis’ friend. He is a talented swordsman and magic user who is also rather level-headed and considerate of others. He becomes a good friend of Aisha as well.

The first spirit summoned by Aisha who learns she has an affinity in magic and spirit summoning. Lou serves as a guide and teacher about some points involving the spirit world and other spirits. She is also considered a friend.

Evidentially the Spirit King who has only appeared a couple times as of the time of writing. I only put him here because he is supposedly the male lead if spoilers are to be believed (you have to scroll down a bit, sorry). Not much is known about him besides the fact that he is near impossible to summon and doesn’t readily appear before humans in the first place (except for Aisha inexplicably).

I really love the art in this webtoon and believe it is honestly probably my favourite so far I’ve seen in a webtoon. Please YUYA-nim, stay to the end and continue bestowing us with your wonderful masterpieces. I swear, I do feel like quite a lot of scenes in the webtoon are pure wallpaper material for your phone. Check these out if you don’t believe me:

Even if the story isn’t as enticing for you to read, at least give it a shot for the art. The art doesn’t disappoint and I would hope that it stays that way as I have seen webtoons where the artstyle changes midway through and the riots in the comment sections of those unfortunate webtoons is not a battlefield you want to be in the middle of.

I would give this series a good prognosis. I believe the mystery and the curiosity behind what really happened to the Edenbell family to kill off an innocent child due to the actions of a demon child is something that will grip readers into the later chapters.

For right now, I believe one of the characteristics of this webtoon that may put some readers off is the fact that the male lead is someone that has barely been seen throughout the 30+ chapters published. I saw a lot of comments complaining about how they wanted the male lead to be Bion, the red head up above, which is fair and would have been my guess once upon a time.

On the other hand, there was one other guy I was thinking about which was one of Aisha’s brothers in her past life who was apparently the only one not present for her sentencing and execution and was someone she had a good relationship throughout her whole life. I know it still sounds weird, but I have read webtoons with weirder relationship dynamics.

All in all, I would say to give this webtoon a chance. It’s not perfect, of course, but I would definitely say with confidence that it’s one of the better ones out there. I just hope that it proves to continue on a promising trajectory and wrap up nicely when all is said and done.