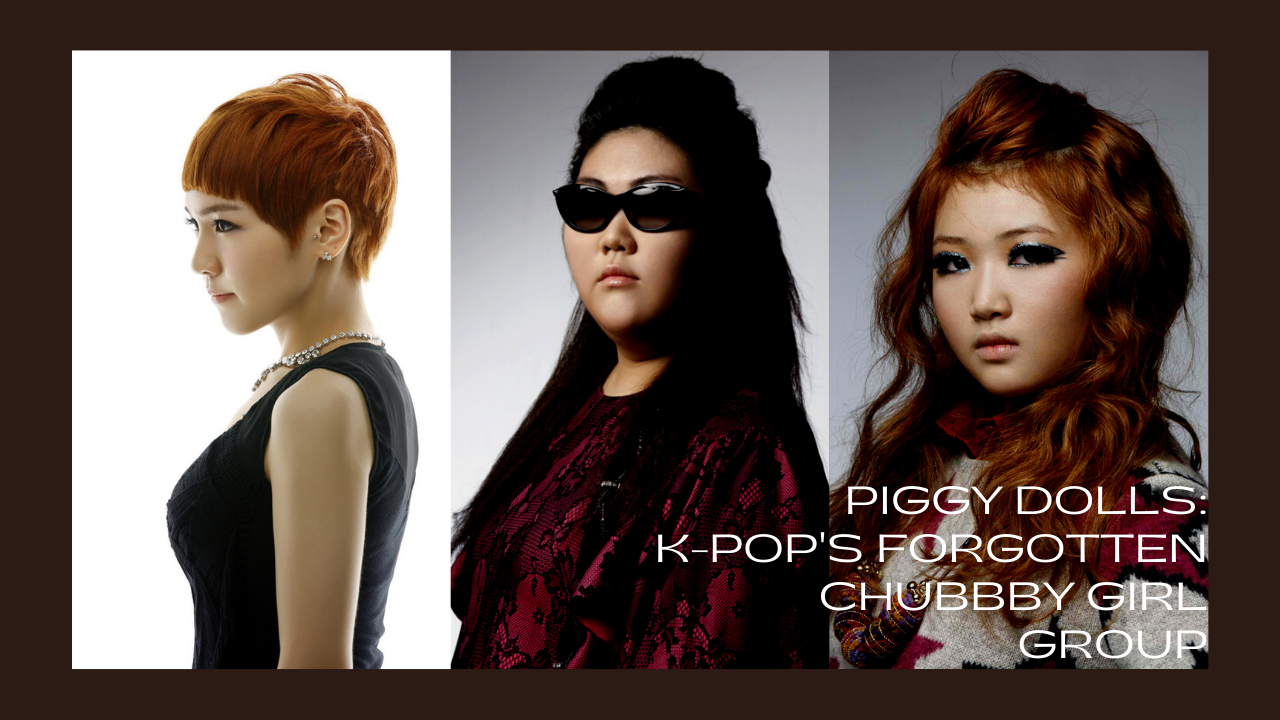 Did you know that K-pop actually had a girl group debut that wasn’t forced to be stick thin and diet on just ice cubes? Yes, back in 2011, a girl group called Piggy Dolls debuted with members considered overweight, or affectionately called chubby in other circles, in South Korea? The group consisted of three young women: Kim Minsun (19), Lee Jiyeon (19), and Park Jieun (16). All ages are from when they debuted back in January of 2011.

And yes, before you ask, the group’s name was suggested to them by their company president, according to an interview in the Hanyangian. I would highly suggest reading the interview, but if you are pressed for time or realizing you want to read the rest of my crap, then I will share one poignant quote from each of the girls when asked what does Piggy Dolls mean for them:

Sentiments that I honestly wished had lasted for a longer time than they did for these girls.

When they debuted with the album titled, Piggy Style, the response was what you would expect especially considering their title song. The tracklist is as followed:

Trend was their title song and if you want to watch the MV, go right on ahead-just click on its name above in the tracklist. It has a fairly long intro so if you just want to hear the actual song from the start, skip to about 2:05. Though it may be worth watching to get some of that background since it shows the girls eating (well, really stuffing their faces but I think that’s just an exaggeration, right? ) while watching a news report of women like them being discriminated for their weight.

As for the song itself, it’s very…2012. In the interview above, Minsun describes “Trend” as a “…funky melody with an electronic twist” while claiming Piggy Dolls doesn’t have a set music genre they follow. Quite catchy though there is some autotuney stuff going on that may turn some off. It’s a shame because part of their appeal was supposed to be in highlighting their powerful voices over their appearance.

And yes, their voices are quite good. A lot of the comments I saw underneath their videos complimented them on their voices with some even saying that they had better vocals than any of the other idols of their day.

Trend isn’t that bad for a debut song. Personally, I liked it a bit better in their live performance. But if you’re still not for the song then at least you can say it has a good message which can basically be summed up as them saying so what if my body is like this? Is that a problem? I’ll still keep loving myself. Or something to that effect. Well, just watch the MV. Some kind soul actually took the time to sub that 240p video.

But then, why haven’t you heard of Piggy Dolls? Or maybe you have but totally forgot they existed? Well, it’s because they pretty much faded into obscurity unfortunately.

Despite trying their best with their debut, the reactions weren’t as huge as their company had wanted. Instead, they got a lot of anti-fans who singled them out on their weight because Korea…is a society. Many even went as far as to say that they were promoting an unhealthy lifestyle which is pretty funny considering that many of their beloved stick thin idols have confessed to eating only a sweet potato/s a day or just followed an apple or banana diet. Some even have had eating disorders.

But, naturally, the CEO of their company thought of what he believed was a surefire solution to try and keep Piggy Dolls relevant and build up their fanbase to boot. Or maybe the poor guy just caved to society’s demands. Either way, did he continue to forge ahead with the “chubby concept”? Nope. Of course not because as we all should know by now, K-pop companies are run by those who never seem to understand how fans work.

Thanks to one YouTube comment, I went down a little rabbit hole and found a clip from Star King, one of those many idol variety shows, where Piggy Dolls made an appearance. This was when they were their plump voluptuous selves. In a couple of clips, shown below, the girls show off their charm and vocal skills impressing the host and audience, all made up of celebrities.

Continuing from that, the girls then make small talk with the host with the talks obviously revolving around their weight. Forgive me in advance, but my Korean is still rough as hell and out of the language trifecta: reading, writing, and listening, the latter is my worst skill. So bare with me. ㅠㅠ

But, from what I gathered, in the first clip, the girls complain about their president wanting them to lose weight.

So when Piggy Dolls did make their comeback, they were new and improved in ways that didn’t have their fans smiling.

Apparently, because the reaction wasn’t exactly what he hoped for, the dude changed his tune and was prepared to drop the concept like a hot potato and go the conventional route which is disappointing to say the least.

From there, it gets a bit emotional as the leader, Misun, the one with the cool shades, starts to tear up and her voice is clearly breaking as she relates how hard it was trying to become an idol due to the discrimination she received due to her weight. It ends with her encouraging overweight people to not be discouraged and to have hope.

Honestly, can’t blame her for becoming so emotional in the face of an industry that demands, of women especially, for one to maintain a thin figure. Where one isn’t even given a first glance if they are deemed chubby or overweight. It was a hopeful message that these three girls had hoped to carry through their songs and present to the industry and society that there was more to being an idol than having a model-like skinny figure. But ultimately, they just wanted to be themselves.

Which is why when they came back a few months later, that there was even more upheavel surrounding their appearance but for the exact opposite reasons.

They had lost weight.

A combined total of 52kg or 114lb. Each member lost at least 10kg (22lb) before they came back with “Hakuna Matata” which is ironic considering the struggles they went through and the pressure they got from their own company to lose weight. It was really nothing short of gaslighting.

According to an interview of the girls at the time, just a couple months after their debut, a diet company approached their management and had a serious talk with their president resulting in the girls dieting together (along with their president as well). And despite many of their overweight fans, who had looked up to them for debuting against the odds, the girls still hoped that they would serve as an inspiration to them.

One of the girls, Jieun, had this to say about their fans’ response:

Which, I guess, is one way to look at it? Personally, I can understand why so many of their fans were upset at their image change. I don’t want to blame the idols themselves considering that their company prez already wanted to dump the “fat image” after their comeback. I wouldn’t even be surprised if he was the one to call in the diet company under the pretense of looking after their health.

But I also understand that it IS the standard to be a certain weight in the industry as frustrating as that sounds. Before the girls had lost weight, two of them were approximately 70kg (about 154lb). In the K-pop industry, that’s considered overweight.

But what’s more, after their transformation comeback, there was complete radio silence on the girls until their company, Winning InSight, announced that they were coming back.

That’s right. The original girls that we have come to know and love were complete replaced by the girls pictured above. Audaciously, the company still kept the name Piggy Dolls, but totally kicked the original girls to the curb.

If that doesn’t show you how commodified these idols are where companies think they can easily replace members, much less a whole group without really thinking of the consequences, then I don’t know what to tell you, mate.

And I don’t want to sound mean, but these three really really look like the industry standard K-pop girl group. Because these girls look like they could be anyone and no one at the same time. Is that too harsh?

But the kicker? They came back with the titular song, “Ordinary Girl.”

The story of “Ordinary Girl” is just the three of them complaining at first that even if they make themselves up for their love, they still look like an ordinary normal girl, but they come to terms with that as the song progresses. Honestly, I don’t mind RnB but the song delved into something else and never really recovered. Actually, the song was pretty boring for me from the start.

Still, the new lineup seemed to survive for a bit as they also released another song with an MV called, “Butterflies.” Though that was just a few weeks later in the same month, but that only draws the question: where was this budget for the original lineup? How did these two songs get on a channel like 1theK, but none of the earlier Piggy Doll songs? I mean, maybe once upon the time they were, but just like a lot of original Piggy Doll content, it was erased from the interwebs.

I kid you not, the site that I found the interview about their diet, is a fansite called “dollypiglet.wordpress.com.” It contained videos, pictures, translated articles and lyrics to a couple songs from the original Piggy Dolls. Unfortunately, most of that media is now lost or deleted. Almost as if the very internet itself wants to forget the original Piggy Dolls.

As for the fate of Piggy Dolls’ successors, they didn’t do so hot either as they also fell off the map not too long after their debut. Well, not completely, as one of them, Kang Eunyoung, is now in Pink Fantasy under the stage name, SeeA.

They are still climbing up the ranks, but Pink Fantasy appear to be doing comparatively better than Piggy Dolls ever did. I recommend “Fantasy” which has very Dreamcatcher-like vibes and if you’re well-acquainted with me, you’d know how much I like Dreamcatcher. But other then that, I honestly haven’t paid much attention to Pink Fantasy, but wishing her and the rest of the group the best.

However, I did get curious and tried hunting through the internet to find out whatever became of the three original members of the group, but found pretty much zilch. Although, I did find a Facebook post wishing one of the original Piggy Doll members, Jiyeon, a happy birthday, just posted yesterday.

Touching in a way, because despite the upsetting demise the original trio had, it looks like there are some who haven’t forgetton about Piggy Dolls or the legacy they tried to pave.