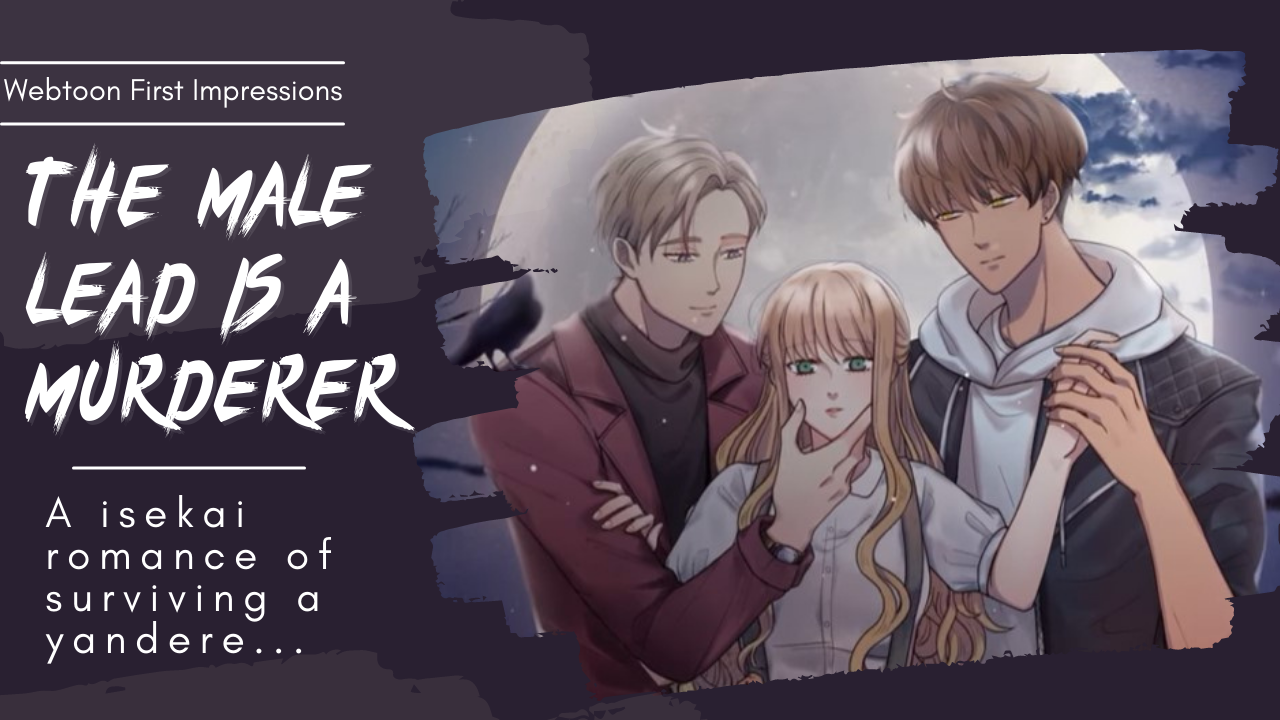 First Impressions, Opinion, WebtoonsLeave a Comment on [Webtoon Review] The Male Lead is a Murderer

I’m finally back on the webtoon train with the thriller romance, “The Male Lead is a Murderer”. This is quite different from your usual brand of isekai-reincarnation webtoon as you can tell from the title alone. What to do when the male lead is a serial killer who is obsessed with seeking your love at no matter the cost? Read on to find out.

“Amber is an author desperate for a best-seller but while trying to write a new idea, she dies in an accident. The next time she opens her eyes, she is the main character inside her own unfinished novel! High school was hell for Amber, and fictional life inside her book is worse – her novel was a thriller where the heroine is pursued by a love-obsessed psychopath! Now, Amber needs to avoid the male lead to stay alive and find a way to bring her book to an ending without losing it all”.

As the summary above states, it actually is quite similar to your “heroine wakes up in a different world and has to survive or die” reincarnation stories, except it’s a bit more dicey and violent. But hey, at least she knows what’s going to happen so it should be easy peasy, right? Right??

Wrong. In an unfinished novel, anything and everything can go wrong.

Our beautiful author and star of the webtoon is Amber or really, Jullie Clarke. She is on a mission to survive her novel while also trying her best to stop her psychopath yandere from hurting those around her. She feels guilty at creating such a monster based on her own personal experiences in high school where she was bullied and ostracized for being different. Thus, at the start, she is more sympathetic towards her murderer as he is a reflection of herself, but that doesn’t mean she won’t stop him.

Due to knowing the plot of her high school novel and being a bit more self-conscious, she is a bit smarter than her reincarnation counterparts, but she flubs up from time to time too. She ain’t perfect, but I don’t believe she deserves some of the hate she gets in the comments as I read through the later chapters either.

Ah, the handsome blonde male lead of the series and thus our beloved yandere psychopath. He is truly something. Oliver has mastered the art of blending in well with general society while keeping his sins under wraps. It also helps to that his parents are freaking rich and so cover up his more overt offenses (though I do not believe they are privy to his more homicidal crimes…I think). Oliver falls madly in love with Jullie due to the fact that he believes she has wholly accepted him for who he is. If someone stands in the way of him and Jullie, then they must be disposed of tout suite.

He is a rather sympathetic villain actually. Considering Jullie (Amber) created him as a mirror as her high school self who sought love and acceptance from others albeit to less of an extreme, Oliver is painted in a grey light. As you read, you come to understand why he is the way he is. Of course, you don’t and shouldn’t condone most of what he does in the webtoon, but you understand he isn’t black and white either.

(But some of y’all be simping a bit too hard for Oliver even at his worst. You guys okay?)

A Minor Character who is Definitely NOT the 2nd Male Lead

So here’s our boy, Leo. He is originally a minor character based off one of Amber’s classmates who she was jealous of to the point of hatred. Doesn’t help that this male classmate was also a famous writer who constantly bumped off Amber’s books from the bestseller list. Due to this, this poor boy, Leo, isn’t supposed to live as it is revealed that Amber wrote that he would die at the hands of Oliver.

Yet, Leo, who wasn’t even supposed to meet Jullie in the first place, saves her from a sexual harasser and from there, their relationship grows steadier. Despite being wary of him at first since he was a physical clone of her hated classmate, Jullie grew to befriend Leo. Eventually, those mutual feelings sprouted to be something more.

But can Jullie save Leo from his original fate?

The art is alright in this one. It’s not “Into the Life Once Again” quality, but it suffices and there are definitely some cute stuff going on here and there.

As one can tell, I’m biased towards Leo (I mean, I like guys with a lil’ melanin in them). But Leo really does have a rather cute personality if I’m honest. Just read this webtoon and find out!

Earlier, in the table above, I gave this webtoon a good prognosis. I think it will end in a somewhat satisfying way. The question is, will the events leading up to it justify the ending? Already I see quite a few people complain about the actions that Jullie (Amber) has taken in some chapters.

To be honest, they have a point. For context, there comes a time in the webtoon where Jullie is fooled by Oliver’s good boy behavior and believe that due to her influence at work in the novel that Oliver has changed for the better. Of course, that’s not the case, but she acts to dense to see it until she catches Oliver in a terrible act again. To her credit, she still held a sliver of doubt but I can see why some readers grew upset with her since she is the author of the novel and Oliver’s creator (though to be fair, if you’re a writer, you know your characters tend to grow on their own).

However, as far as I see it, Jullie being a bit dense and slow at times is the only issue I worry about as the webtoon continues towards its end. In later parts, it seems like she wraps Leo into this dense bubble, but to the readers on those parts, I would exercise patience and understanding. If I write more, I may spoil more than I mean to.

Regardless, it’s a solid webtoon and a nice change of pace from the more romantic comedies out there in the romance isekai genre. If you’re looking for a more tense thrilling read, then “The Male Lead is a Murderer” is one of your best bets out there.

Wishing Jullie (Amber) good luck in seeking a better happiness than she ever got in her previous life.