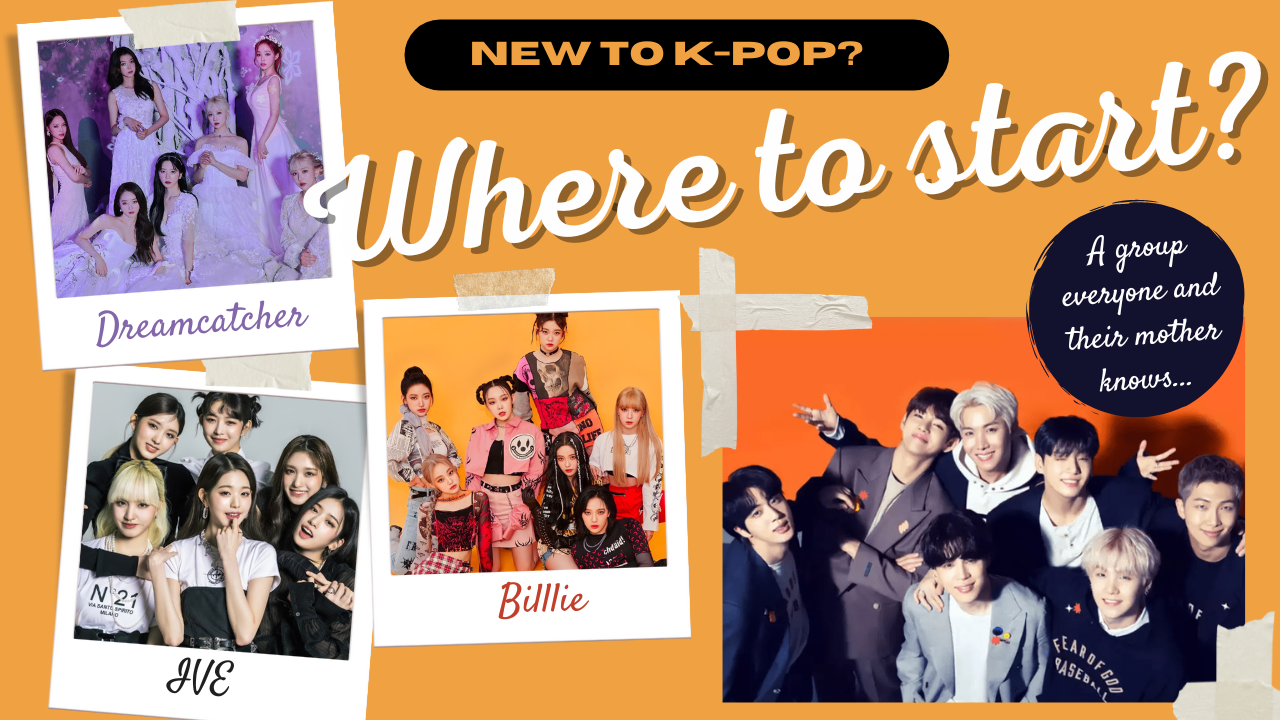 Informative, K-pop Beginners, Long Read, OpinionLeave a Comment on Where to Start with K-pop

South Korea’s K-pop has seen a tremendous rise in popularity all across the world. Groups like BTS, AESPA, BLACKPINK, and more are now common to see plastered across US screens and magazines. With even a K-pop movie in the works, now is a great time to get into the fantastical genre known as K-pop. But where to start? With so many groups and styles to explore, it may seem intimidating, but I’m here to help you figure out how to start listening to the genre storming the world and probably your Twitter timelines.

K-pop stands for Korean popular music, but the term is sometimes used to encompass more than just pop. K-pop utilizes different genres such as rock, rap, techno, jazz, R&B, classical and more. Some people would argue that K-pop goes beyond the music as the visuals and practices also make up what makes K-pop what is is today. K-pop as we know it first caught national and global attention with the boy group, Seo Taiji and Boys, back in 1992.

The group was made up of Seo Taiji, Yang Hyun-suk, and Lee Juno. Yang Hyun-suk is a name you may be familiar with as he was the founder of one of the top K-pop companies in the world, YG Entertainment, which houses groups like Big Bang, Winner, and BLACKPINK.

However, when one thinks about K-pop, they usually think of idol groups, right? While Seo Taiji and Boys experimented with different Western music genres especially rap which has influenced K-pop songs even to this day, they’re not the traditional idol group you might be looking for.

One of the most famous boy groups back in the 1990s’ was H.O.T. Debuting through SM Entertainment, they were a highly popular boy group who were considered to be the first actual idol group of modern K-pop. Another boy group that rose to popularity to rival H.O.T. was Sech Kies who are still active today under YG Entertainment.

If you’re interested in exploring a bit of 1990s’ idol culture and love K-dramas, I would highly recommend the drama, Reply 1997. Idol culture was on a meteoric rise when the show took place and plays an invaluable part of showcasing every day life in late 1990s’ South Korea. As a bonus, the show also casted some well-known idols such as Eun Ji-won, the leader of Sechs Kies and Apink‘s Jung Eunji.

If you’re looking for girl groups of this time period, then check out S.E.S., Fin.K.L, and Baby Vox.

Okay, but what about the groups of today? Who should you start with and why? With over hundreds of groups to choose from, it can be tough to figure out where to begin. For now, we’ll just start with the more popular acts (they’re famous for a reason!) and if you find K-pop is right for you then I urge you to research other groups similar to the ones below (or even go the indie route)!

I feel at this point that BTS needs no introduction but for the sake of genuine newcomers to K-pop, I’ll do a quick rundown.

Arguably the most popular K-pop group in the world, BTS is a seven member boy group who debuted back in 2013 under BigHit (now HYBE) Entertainment. The members consists of: RM, Suga, Jin, Jungkook, V, Jimin, and J-hope. Their debut song, “No More Dream,” was a starting point to their fame in creating political commentary within their music and a fresh take to the music and lyrics of K-pop. Continuously experimenting with their sound and direction, I’m nearly certain if you comb through their ever extensive discography, you’ll find a song that suits your fancy.

BTS has really grown to be an international force to be reckon with as their appearances on Western TV, magazines, and theaters are only paralleled by their monumental achievements in K-pop and as a K-pop group who can boast numerous records broken, dozens of accolades, UN ambassadorships, and more.

Recently, news broke out the members of BTS are indeed going to do their compulsory conscription into the military starting with the oldest member, Jin. For those confused, South Korea requires all males between the ages of 18 and 35 to complete around 18 months of military service. Generally, the age one must go for conscription is by the age of 28. There are alternatives for those with special circumstances or the less able-bodied, but generally it is highly frowned upon and frankly against the law to skimp on conscription. Needless to say, this has created quite an uproar in ARMY (BTS fandom) circles.

On a personal note, BTS was my entryway into K-pop a few years ago and while their recent discography is good, I’d also highly recommend not to forget their earlier songs, too! You might find a now hidden gem there.

BLACKPINK is also another K-pop group that leaves little to be introduced, but just with BTS, I’ll give a quick and very condensed run-down.

BLACKPINK is a four member girl group who debuted under YG Entertainment back in 2016. The members consists of: Jennie, Lisa, Jisoo, and Rosé. Though BLACKPINK isn’t as active as other groups like BTS, they have risen to fame quickly as being the IT girl group when it comes to K-pop. Whether it be their fashion, bombastic music videos, or the talents of the girls themselves, BLACKPINK has found a huge and devoted fanbase all across the world.

If you want to learn more about BLACKPINK and have a Netflix account, I would have to recommend their documentary, BLACKPINK: Light Up the Sky (2020). It’s a very interesting look at BLACKPINK as individuals and what they have had to strive through to become the group that they are today. I also wrote a review on it when it came out along with a handy YouTube video if you prefer that (link to video in that post).

Recommended songs: Lovesick Girls, Playing with Fire, As If It’s Your Last

NCT which stands for “Neo-Culture Technology” is a 23-member group from SM Entertainment that debuted in 2016. Yes, you read that correctly, 23 members. Due to the sheer number of boys in the group, I won’t list them this time, but I implore you to look into them if you’re already interested.

Thankfully, SM has made it easier by splitting the boys into subunits like NCT Dream up above. The other subunits are NCT U, NCT 127, WayV (Chinese unit), and a soon to come NCT Hollywood and NCT Tokyo which will focus on American and Japanese markets respectively.

NCT is one of the rare K-pop groups that continuously adds members even after debut. The most recent members that were just added to the group are Shotaro and Sungchan who joined in 2020. Due to this, you probably don’t have to worry about NCT going away any time soon. So if you want a challenge of memorizing and getting to know over 20 boys then by all means, give NCT a try. You’re guaranteed to find someone you like.

TWICE is one of the most popular girls groups in and outside of Korea as they rival BLACKPINK in terms of popularity and sales. Debuting under JYP Entertainment in 2015, the group consists of 9 members: Tzuyu, Mina, Jihyo, Nayeon, Dahyun, Chaeyoung, Sana, Jeongyeon, and Momo.

Known originally for their bubblegum pop sound, TWICE’s image has changed in the last few years to successfully incorporate a more mature and powerful sound in their songs. Not to mention how danceable their choreography is. Songs like: TT, What is Love, Signal, and Fancy (above) are popular songs that have gone a bit viral thanks to their dances.

The members of TWICE just renewed their contracts with JYP, so they will still be here for some years to come.

Recommended songs: The Feels, Likey, and any of the above

What if you want to listen to some of the newer groups in K-pop to give the underdogs a try? I personally can’t recommend a lot as if I’ve been taking an on and off again hiatus with K-pop recently due to life being busy. Still, there are some groups I have heard ain’t too shabby. Let’s check out a few.

(Note: This will just be featuring girl groups because I have really heard so little of the newer boy groups this year, I’m not kidding).

Billlie, with three ‘l’s debuted in November of last year under a subsidary of SM Entertainment called Mystic Story. The group consists of 7 members:  Moon Sua, Suhyeon, Haram, Tsuki, Sheon, Siyoon, and Haruna. The group definitely has an interesting sound with the above MV and it’ll probably be a hit or miss for some (seriously, parts of it kind of sound just like noise) but personally I like it. I didn’t at first but it grew on me.

Recommended songs (these are both B-sides): a sign ~ anonymous, overlap (1/1)

IVE (pronounced “Aive” or “Aibeu” if you’re going the Korean way), is a six-member girl group consisting of: Yujin, Gaeul, Rei, Wonyoung, Liz, and Leeseo. They debuted in December of last year with the song, Eleven (another banger), under Starship Entertainment. They are rather popular for a new girl group so I’d give them a shot because there must be a reason they’re this popular, right?

With a mix of Japanese and Korean members (some former IZ*ONE members), this five-member group consists of members: Chaewon, Sakura, Yunjin, Kazuha, and Eunchae and they debuted under Hybe Entertainment and Source Music as the former’s first girl group. Originally consisting of 6 members, Kim Garam found herself embroiled in a bullying scandal where she was accused of being the aggressor. Her contract was eventually terminated and she was ousted from the group after barely debuting.

While LE SSERAFIM’s debut back in May was steeped with scandal, their debut song, FEARLESS, really isn’t a bad start. I’d give them a chance. These girls deserve it after all as most of them have been working hard in this industry for years.

On a side note: Another HYBE group to look out for is NEWJEANS (yes, these companies really come up with the most…interesting names), LE SSERAFIM’s sister group who just debuted back in August. They have some promising music as well.

Recommended songs: To be honest, I have not really listened to any songs outside of FEARLESS, so just pick any you fancy. Same with NEWJEANS.

I just barely scratched the surface with K-pop. There are plenty more groups and styles within K-pop that you should definitely check out. I hope that this piece helped convince you to listen to any or all of these wonderful groups.

Personally, I just say go for it! Just go ahead and click play on any of the videos above and start listening. The first step to getting into K-pop is to just start listening and go from there. While there is much to learn, take it day by day and you’ll be a master in K-pop in no time.