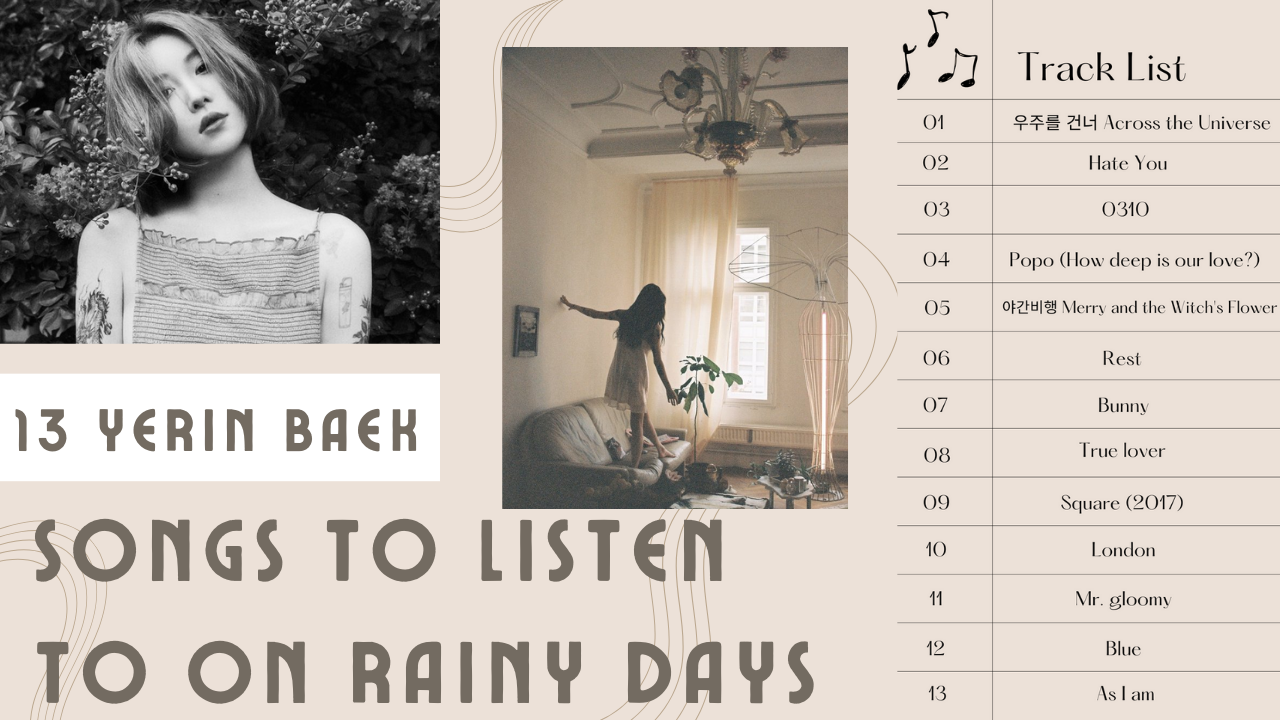 Listicles, SoloistsLeave a Comment on 13 Yerin Baek Songs to Chill to on Rainy Days

For those who don’t know who Yerin Baek is, she is a singer-songwriter who used to be part of the JYP K-pop duo 15& with Jimin Park (now Jamie or Jamie Park) from 2012-2015. The same year they disbanded, Yerin Baek went solo and released her first EP, Frank with the lead single being “Across the Universe” (more on that song later). Since then, she’s released a couple more EPs and two studio albums.

And, she is definitely one of my favorite Korean artists, at least according to my Spotify Wrap from last year. I really do like listening to her when I just need something chill or brooding, if I’m totally honest. These 13 songs are honestly my favorites of her tracks and I hope you find one you enjoy too. Bonus: most of the songs are in English so for my English speakers, you’re welcome!

I lied. I love this song. This is the song that pretty much started it all for her solo career and me being a fan. Across the Universe is a sentimental song about waiting for one’s lover and as the title implies, even crossing the universe to be with them. The opening notes of the piano create an almost contemplative and fits well with the overall melodic theme of this already bittersweet song. Please give this one a listen if nothing else.

I lied again. I highly recommend giving this song a whirl too. It’s quite different in tone from Across the Universe. Plus, it’s completely in English~! As the title suggests, Yerin sings about a boy who spurns her and basically disses him throughout the song calling him a “fuckboy” and pointing out “there is someone who can’t eat or pray cause of you.” Some spicy lyrics here indeed. If you want a more angsty middle fingers up kind of song – here you go.

So, Yerin Baek often likes to add little stories to her MVs that clocks in more time hence where this is almost 10 minutes. The song starts around 2:30 but it stops almost midway through, but if you just want the plain old song with lyrics then click here. Story aside, we’re back to the chill songs with this one being more brooding and moody. It is also a fully English song so yay~!

This one just feels a bit more romantic in nature. I mean with lyrics like “Can I walk with you or have a tea with you?”/”Your scent makes me feel like I live in Paris.” This is a song that kind of makes me want to fall in love (but that’s too much work). With some nice R&B tones and Yerin’s pensive voice guiding the way, you will feel like you’re swaying along to the rhythm in Paris, too.

5. 야간비행 Merry and the Witch’s Flower

Goodness, I really like this one too even if it’s more on the slower, maybe even boring side for those who hate slow songs like this. This song is inspired by the Studio Ponoc movie, “Mary and the Witch’s Flower,” a Studio Ghibli-like film that came out a few years ago to somewhat modest success.

If you haven’t seen the movie, I would suggest to do so, in order to fully appreciate the lyrics or you can check out my review~ The opening of the song itself feels quite mystical and magical in a way with a underlaying vibe that is quite mysterious. Honestly, for me, this song is rather sad because it just sounds lonely especially coupled with the lyrics.

This one isn’t really a love song or an angsty song against one’s lover. This one is as the title suggests, just wanting to rest. While the song still has a steady relaxed tone present in some of her other songs, this song as a hint of warmth as Yerin wistfully wishes to be somewhere on a fluffy couch just chilling and resting her eyes. Don’t we all wish that?

Okay, this song is real cute and makes me nod my head to the beat happily. Yerin even leaves in a soft giggle at one point as she declares that “I am your bunny.” It’s a really adorable song that isn’t too kawaii gwiyomi or whatever the kids say these days, but instead as a bit more of a mature vibe (I know kinda paradoxical).

One of the greatest influences on Yerin Baek’s music is Amy Winehouse. This song appears to be about Amy and Yerin’s love and respect for the artist. It’s not as sad as you may think and even as a similar tone to Rest, but I definitely love listening to this song as I lay in bed just losing myself to the song. You should try it.

This comforting somewhat upbeat song is apparently a fan favorite and a really popular song that has a number of versions. 2017 was when she first performed the song and it proved to be her most popular version. Despite that, there is no official MV or studio version of the song, but it’s definitely a recommended listen. It’s still a love song where Yerin finds comfort in her lover amidst her weaknesses and the hard days, but for me, it sounds warm and almost nostalgic.

Another sad banger. Is that a thing? Sad bangers? Well, I kind of lie as London, similar to the city’s image, is quite the gloomy and grey track. This one talks about Yerin moving on from her man after they start to draw away from each other due to differences. It’s a sentimental piece that’ll definitely be relatable to some of you guys out there.

Well, if you thought London was dreary, then Mr. gloomy takes the cake. Interestingly enough, she makes mention of London bridge in this song (no mention of London in her song called London). The rhodes piano I believe I hear at the start of the song which becomes part of the backing track, reminds me of falling raindrops or heavy footsteps walking through a cloudy rainy day in London. That’s the vibes this song emanates as Yerin wistfully sings about a man she loves who may not have loved her back. Sad, indeed.

This song I can safely say is overshadowed by another Yerin song called “Bye bye my blue” which is an alright song but “Blue” I find better in some ways. At the very least, it’s a bit livelier which is always appreciated unless you want to wallow in woe? Not much else to say besides try it if you want to or listen to bye bye my blue if that’s more your taste.

Softly backed by a guitar with lyrics that has Yerin embracing herself as she is despite what others may say. So yeah, a girl boss song without the loudness and shouting. If you want one that’s more chill and relaxing but still strong with its message (that’s in English by the way!).

And that was 13 songs I feel perfectly suit a rainy gloomy day where all you want to do is relax in bed and stare at the ceiling wondering where you went wrong in life. This is one of the first times I’ve done a listicle post so I hope it wasn’t too boring. I plan to do more of this type of content as I get back in my stride writing up posts. Thanks for dropping by and I hope you find a Yerin Baek song that works for you~