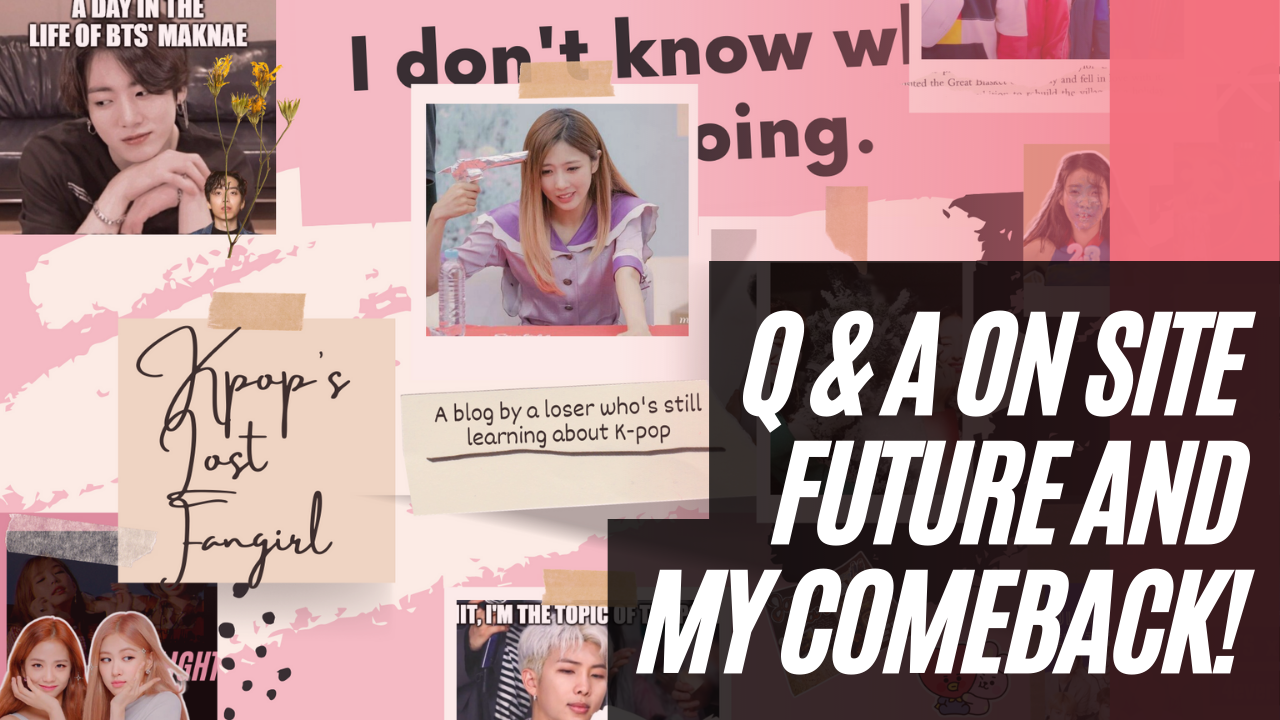 Informative, Q&ALeave a Comment on Q & A on Site Future and My Comeback!

Salutations all! It’s been a while and I hope you all are well and somehow surviving during these trying times. If that last phrase didn’t trigger you, then either you have become numb to the pandemic or you’re just ignoring it completely. Just please stay safe as best as you can.

Anyway, this post is serves to be an update for me and the site, so those that still occasionally visit the site knows what’s up as of January 2022.

Q1: Is the site still active?

Yes, it’s still active. I haven’t posted a lot in the past half year or so, but I am still brainstorming posts and writing stuff up. Life and grad school were keeping me busy but I hope to get back on track with the blog starting from now.

Q2: Why do I just see BTS content?? Where are my faves?

Good question. BTS are just a gold mine of content whether we like it or not. BTS was also my first K-pop group and though my feelings towards them have cooled to being just more of an academic observer, they still inspire a lot of posts for this blog. As for your faves, I write whoever takes my fancy. I’m sure you don’t want an ignorant nobody to write about your faves without really knowing them. I’m not like some people.

Q3: Are you still going to do music reviews now that you’re back?

Long answer: I don’t want to do them for the time being because the last few ones I did felt virtually the same in terms of reaction and writing. Not to mention, that for whatever reason, K-pop is not hitting me like it used to and so, most songs (90% maybe) sound the same or are just meh to my ears. In addition, I want to force myself to focus on other content besides music since my interests have expanded a bit.

Haha, that would kind of defeat the purpose of my site though, wouldn’t it? I will still cover K-pop. Hell, my latest post that really signaled my comeback was a study on parasocial relationships through BTS’s BE. Check it out if you have time, it’s a long read.

But, I want to explore other venues like films, dramas, and more recently, webtoons. For the past year, I’ve been reading a fair amount of webtoons and definitely want to write up on them, so if you like webtoons than hopefully I will bust my butt to get you some webtoon content. Oh, and hopefully we’ll see more book reviews, too.

Q5: Is this your only active site/social media platform?

No. I have another website that covers Japanese popular media that was less updated than this site, but I’m starting to find my groove with it again. It’s called: thelostjapanophile. I already published a couple posts on there this month and hope to publish more. That site was more music focused too with the occasional anime post, but lately otome games have caught my fancy so look forward to more posts about that.

I haven’t been active on Twitter for a year now but I have been thinking of going back. I actually may post a link to this post as my first tweet since last year. But personally, I don’t like using Twitter as much. As for other platforms, I was using Instagram and should probably get back on that. I don’t have Facebook and never will. The only active social platform I am on is Twitch where I stream irregularly (at least once a week though). I mostly play games so if that’s not your cup of tea, than I would refrain from coming.

And by the by, you can find me as a_lost_idiot/A Lost Idiot on all of these platforms.

I hope that provides some answers to nonexistent questions you all may have had. I really do hope I don’t disappear again but life is unpredictable as much as my health, so I may not be cranking out content as much as I’d hope. However, the most important takeaway from this post is that I am continuing the blog and I don’t want to go away any time soon.

Thank you for your continued support and I hope you continue to stick with this nonsensical lost idiot for a bit longer. Cheers!