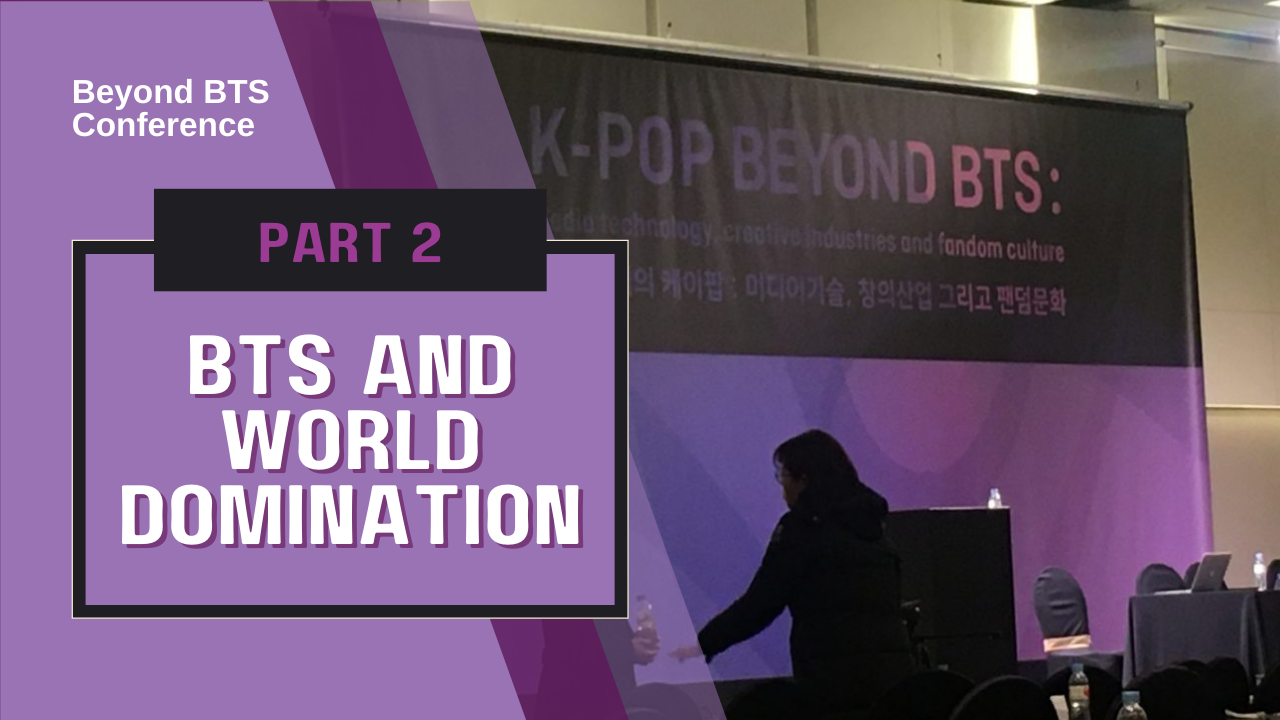 Hey, I’m back and only a week later which is a major achievement. Cue the confetti cannons! Okay, but this post will be a quickie on the 3rd session of the Yonsei conference centered around the oh-so-popular 7-member boy group. This session’s theme was globalization and cultural hybridity. As you may be asking, what is cultural hybridity? I mean, most people at this point should know what globalization is but I will provide a simple definition via Google:

I hope that makes sense but if it doesn’t the following presentations should give you an idea of what is meant by the two terms up above. Despite all the complicated jargon these people throw at you during these kind of conferences, it is possible to dumb down all of that which I will try to do with the sessions as followed.

If you haven’t already, check out the other conference posts:

Part 1: UNICEF, Koreaboos, and the Wonders of Social Media

Part 3: The Influence of Media and Technology

Presentation 1: From BTS to MC Sniper

Already at this point of the conference, I was just taking notes in bullet points over full blown out sentences. Probably for the best because in some of these presentations a whole lot was said but not a ton was conveyed for proper understanding for a plain gal like me.

That’s it. That’s all you need to really know about this presentation.

Well, not really. I had a few more notes that I had typed down, but I really wish I had been a bit more thorough because since this happened more than a month ago, I can’t quite remember exactly what happened and why. Still, I will do my best.

This quote was in the presentation and I don’t remember the context because past me just wrote the quote down and nothing else. Useless, I really am. Though, if I had to guess and put my own perspective on it, I would wager that it was references the connection of making profit off of the anxiety and insecurity found within the public who are bolstered by encouraging and inspiring words, or in BTS’s case, songs as well. Though admittedly I’m probably wrong but that’s what I thought of when I read the quote initially. But I don’t know who Maverick is.

All quite interesting even though it’s just quick notes jotted down. I will break up the list by just inputting here that the 2nd bullet point about providing a fantasy to fans is definitely true for all K-pop groups as if we didn’t know that already. If idols didn’t, than they wouldn’t be nearly as successive though some would argue this sentiment. I may dedicate a future blog piece on that but for now I’ll just give you the rest of my notes:

One of the biggest characteristics of the neo-liberal society, is that now the male body has become a subject of interest. Because women needs must be met more.

Hybridity: focus on hybridity vs its functions. Nothing new to hybridity once a culture is established. Might be too premature? Considering K-pop is still rising.

Consumption as a living simulation?

But what’s hyperreality? Hyperreality is basically when you can’t distinguish between reality and something that mimics or simulates reality. Kind of like the idol image. What’s real and what isn’t?

Presentation 2: K without the K-pop

The presenter gave to meanings to this title:

2. A K-pop group without any Korean fans

Some important characteristics that the man presenting discussed was:

Example of the power of fandoms: To increase the ranking of BTS songs on music charts, US and Non-US based ARMYs, BTS’s fandom, share how to do it amongst each other as apparently it can differ across different countries and territories.

MONSTA X, KARD, MOMOLAND, Stray Kidz, are all examples of idols getting more recognition in the US/West than in Korea.

As you can see (or not, curse my crappy phone camera quality), Momoland is ridiculously popular in the Philippines while Stray Kids’s data is a bit more varied but they have a slightly larger hold in the good ole US of A. Unfortunately, even I can’t see who came in at a close second.

But what was noticed by the presenter was that these groups were not really making huge efforts to approach Korean fans. Which makes sense as a lot of companies, after seeing BigHit’s BTS’s success in America, fervently sought exporting their groups over to the land of the free in order to make those big profits and to also promote their group to a larger audience. It was a signal to many in the entertainment industry that they didn’t have to focus on just the Korean market, which is not all that big especially when you cater in that even in South Korea, K-pop is still has quite a niche audience in the general public.

This has led to many Korean fans feeling neglected and upset and of course, when the companies don’t listen to them, their turn their frustrations on their foreign counterparts.

Apparently 외퀴 (I hate Korean romanization so I’m sorry if you can’t read it, but use Google), is a derogatory word referring to foreign fans that some Korean K-pop fans use. It means in English, “foreign cockroach.” So that’s nice.

Yup, good stuff like that. Reminds me of the times that I heard Korean fans complain about how BTS are their boys and felt threatened by Western fans taking them away which I guess isn’t that far-fetched considering the boys now go to America like 50+ times a year now. But I would say BTS is better than Monsta X who truly seemed to be in America for the longest time and when they finally had a Korean comeback, Wonho drops out of the group. A topic I look forward to writing about someday.

The bold title Korean words just mean racial discrimination and whitewashing. Once again this slide is a Korean fans vs Overseas fans but this time on the topic of whitewashing idols and discriminating against Southeast Asians all under the blanket of ethnocentrism. Though I’ll be honest, my Korean is rough so I may have gotten some things wrong about this slide, but thankfully this was the end of the presentation anyway.

Oh boy, this one was a surprising one to see on the list and also one presentation I looked forward too because yes, this proves BigHit actually acknowledges the existence of BTS’s black fans, but do they necessarily care about your problems? Hahahahaha, no.

The lady who presented this started with this slide of characteristics of black fans in BTS’s ARMY. Specifically, some of the discussion that circulates within this specific circle that you can see through the graininess of my photo that this includes: mockery, appropriation, and appreciation.

The title of this slide is is just questioning why BTS? As in why study them which the answers are obvious but from my notes I wrote down these particulars:

And apparently she also interviewed about 10 black fans while also gathering some data off of Twitter. Unfortunately, I don’t have the pictures for that but I do have this:

I had thought that Snapchat’s camera would be a bit better since for whatever reason, my camera zooms in more when on the app, so I have a couple of pictures like the one above. But someone, please explain how that works–I’m an old woman and don’t understand. Anyways, this presentation went in a slightly different direction than I had assumed as the presenter started talking about black women questioning whether Asian men liked them while also wrestling with their feelings for them. It was interesting, I guess, as I assume that the thought has crossed the minds of many black fans within the K-pop fandom.

Though I couldn’t help but feel somewhat embarrassed seeing this artwork when this slide popped up. Very good artistic skills and quality but again, knowing that this was being filmed and that I know that Bang Shi-hyuk and his lackeys were probably going to watch all this back in some shady room within their shady company building, I felt as if this came across as black fans being kinda thirsty for Asian men than anything.

Hmm, I wonder if BTS saw any of this? Imagine that.

This photo shows a screenshot from Chicken Noodle Soup along with one of the cameramen filming the conference. The presenter, I believe, was just explaining how BTS has incorporated black culture into their songs and yada yada yada. You know, good stuff. There wasn’t mention how some fans, not just black actually, were discontent with some of the characteristics of this video namely with some lyrics and J-hope’s hair. But again, this was a BigHit-sponsored conference, what do you expect?

I really wish I had written better notes. Really banging myself across the head for this one. But the presentation made an interesting turn in that it also talked about groups like EXPedition, a group of some white guys that tried (trying?) to form their own K-pop group under the watchful eye of a master’s student that wanted to prove or thesis or something. The presenter also talked about the then recent h3h3 drama were he had mentioned in one of his podcast videos that he pretty much called k-pop fans gay as you can see above.

Honestly, I’m not entirely sure or remember why she included this into her presentation, but I guess it was interesting nevertheless. I think she was just exploring the global effects of K-pop through other such acts like EXPedition and someone who clearly doesn’t like K-pop. Though that’s how she ended her presentation which I think could’ve wrapped up better but it doesn’t really matter now.

Though she did throw out there the term: Vernacular Cosmopolitanism. And apparently that means the practices of female black fans. She mentioned that it was still an ambiguous concept that she has to develop more. Regardless, I definitely give the lady props for trying at least since this was a Korean women studying a black fandom that feels largely ignored (at least that is what my Twitter timeline tells me).

Personally, these three presentations were perhaps the more interesting ones of the evening. I debate whether I should write up the post for the next session but considering it is the last, I will try. Though I do not think there will be much to say.

I hope you enjoyed this one (hah) and stay tuned for the next post!