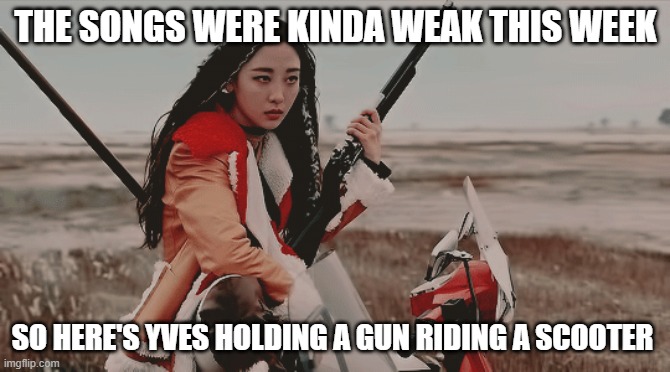 "Reviews", OpinionLeave a Comment on I’m Back? First Week of August K-pop Thoughts…

Hi guys, what’s up? I’ve finally returned with…a “weekly” K-pop review. However, let’s be real, now that it’s August and I’m gonna be starting school in a week, my posts will still be irregular but I hope I can start writing for the blog again slowly but surely. I’ll possibly go into more detail in a future post on where I stand with K-pop. For now, just come along with me for another round of the latest K-pop releases.

Well, going on hiatus for a few months to come back to this soft retro sound makes me feel like I didn’t miss much. This sound is still a trend? Anyway, the song itself…eh, I’ve heard better from Sunmi but the MV was rather entertaining.

Forgive me for sounding like an old fart of a fan, but I must say…I really resonated more with DC’s older sound than their recent stuff (and this includes B-sides). I still don’t mind this one (has it’s good parts!) but it’s not gonna be on repeat like Sleepwalking or Scream and etc. Also, it’s technically not an August release but I’m keeping it in on the off-chance someone actually wants to hear my opinion considering I’m a fan of DC and some people actually wanna know my opinion for some reason.

Song isn’t necessarily for me but I learned that it’s around the 14th anniversary of Girls’ Generation, so congrats~

Summer is approaching it’s end soon so they gotta get rid of those remaining summer time tracks somehow.

This is definitely one for the fans so enjoy if you love your Weeekly girls, but if you don’t care or know ’em, then maybe the appeal of cute girls doing cute things may satisfy you over the music.

I don’t have much to say. I think you already know what it’ll sound like just by the title alone.

Dang, when was ASTRO’s last comeback? Feel like it’s been a while or am I wrong? Song s’alright, I guess. Not crazy about it though but could be worse.

Like DC, ONEUS has been a hit or miss for me lately and this is mostly a miss. The rap parts aren’t doing it for me, but the vocal parts are passable. I think I would’ve liked this song more if it went in a slightly different direction.

Here’s a song for all you Latin lovers.

For whatever reason, I like the sounds going on in the background (backing track, anyone?) but personally it’s not all the way there for me but a good effort.

Hmm, Woojin is formerly of Stray Kids, no? I remember back in ye olden days of 2019 when boy groups were losing members left and right and he was one of them (before getting himself into more trouble and degrading his reputation further). But we’re just here for the music and regardless of what you may feel for Woojin…this ain’t that half bad of a song I suppose. I don’t hate it but not headbanging to it either.

I kept the [STATION] part in the title because songs that come out of SM Station tend to be…different from the usual SM stuff that they do in their respective groups. For a song called “Paint Me Naked,” I was expecting something different but…okay…this is alright, too. Kinda.

I can’t really dislike this song despite it being slower (and people seem to hate slower songs like ballads for whatever reason), I would definitely listen to this if I need a calmer chill song with a dash of feel good vibes to it.

Well, here’s another song for the chill K-pop playlist. This is in the same category as the last song (and that’s not necessarily a bad thing).

This sounds like an OST from a drama. Take that as you will.

I appreciate the rock sound in this song but it sorta numbs me. Like an “Oh, that’s nice” sorta of feeling.

I’m no music producer but I’m not sure I agree with that experimentation in the middle of a song that already doesn’t sound the greatest.

This is short and rather okay so it passes.

I can safely say that while this is a perfectly good song and is easy on the ears, I don’t feel much for it. Pretty neutral and that’s honestly a better reaction than you’d think you’d get from the already dead inside me.

And that’s all for this week folks, I hope I will be able to write up another piece soon – “review” or not. Take care and have a good August!