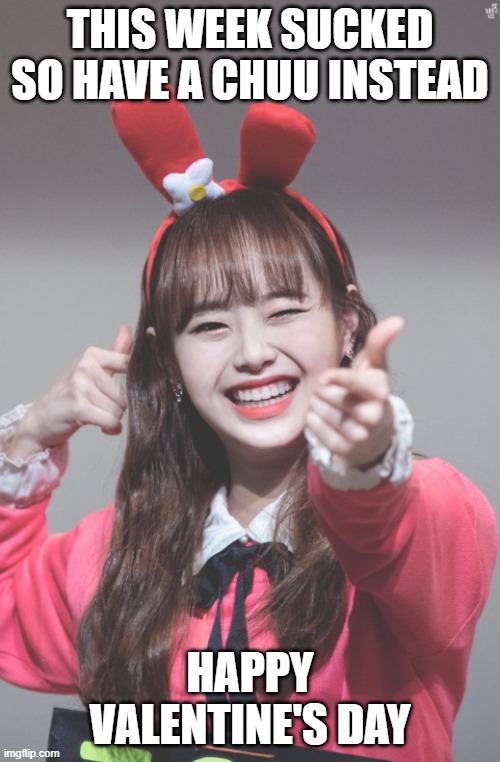 Hi, I tried to be on time this week and succeeded. I hope you are having/had a good Valentine’s Day if you even acknoweledged it in the first place.

I’ve noticed when K-pop groups go on “First Take,” the song sounds a bit different from if you listened to it as it should be (i.e. not the studio version). Anyways, song is a bit boring for me.

Mark Tuan x Sanjoy – One in a Million

Mark didn’t waste no time either once he left GOT7, that’s nice. The song is pretty meh for my tastes though.

I found myself distracted by my thoughts while listening to this song, so I think suffice to say that’s enough to tell you how I feel about this song.

To be honest, I wasn’t sure about putting this one in, but I guess it counts. I mean, Lisa is in it and I THINK she’s the one that’s singing (I can’t be bothered to double check honestly). Though it’s completely in English which is interesting. I don’t really have much of an opinion on this song. Lisa’s dancing is pretty stellar as usual but that’s about all I can say.

How Yoyomi got mixed up with JYP – I’ll never know but the song is…not for me this time around. Maybe cause JYP is in it.

There’s something about the animation that throws me off, really. The song is eh – I don’t really take to it. The lady’s voice is definitely one of a professional though, so I guess that’s nice?

Man, I feel like this guys are forgotten and greatly overshadowed by their sister group, Dreamcatcher (yes, D1CE is under Happyface, same as DC). Even when I looked them up on Google, it said D1CE was under the Dreamcatcher Company – hilarious.

But I can kinda see why, this song is honestly pretty boring.

I cut it off about 20 seconds in because I already know what type of song this will be.

A full English song with a…English intro. He sounds pretty good actually (but then again, idols have been known to sing well in English but outside songs, they can’t speak more than a few words without a translator).

I’m more bothered by how he’s singing into the mic wrong.

A slower trot-like song that I’ll pass on.

The singer’s eyes are kinda unnerving and that’s all I took away from with this song.

Honestly, this OST was better than pretty much all the songs this week which I don’t know is saying much?

This is CHOA , formerly from AOA, yes? I know she’s been back in the scene since mid last year so that’s nice, I guess. Song isn’t really worth it though.

나로 바꾸자 Switch to me” by DAHYUN and CHAEYOUNG – Melody Project

So, that was a real quick and slightly painful week of releases. The above song only proves that as two TWICE girls cover the one JYP and Rain song from like a couple weeks ago. Kinda interesting their take on it, but I gotta ask: who forced them to do this?

Right, well see none of you guys next week since according to my stats, no one reads these (facts, not self-deprecation for once). Ta~