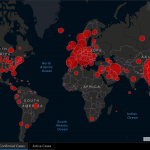 I have perhaps been the sickest I have ever been for the past 2+ weeks and I have finally recovered enough to write something on this darn blog of mine. I got the idea to write this post due to my own sickness and the rise of the coronavirus. Apparently, I had a bit of an upper respiratory infection which caused me to have pretty awful sinus headaches and a fatigue that even the dead couldn’t match on some days. Then it evolved into a cold that has devolved into just some sniffles and a runny nose. Delightful, I know.

But it was incredible in a way. I had never ever gotten sick like this even as a kid, so no wonder I was secretly fearing I somehow contracted the coronavirus. I had heard cases of people who hadn’ t even traveled to the affected areas getting the virus so maybe me too? Granted, I was in South Korea for a good 4 months last year and only came back home at the end of December but the virus hadn’t even reached Korea yet, there was no way the virus could have incubated in my body for that long either so I was just being paranoid as usual.

So that’s another reason why I decided to whip up this piece to quail some of your irrational fears and to bring some nonsense during this time. In a world that seems to be going crazy where people are literally fighting over toilet paper, events are being cancelled left and right, and Tom Hanks and his wife, Rita Wilson, have tested positive for the virus causing Twitter to catch on fire, but when is it not?

But this post is still gonna be a short one because my confidence in writing has gone down from being away for so long and I literally thought of writing this up like yesterday.

So let’s begin with what is the Coronavirus?

The WHO (The World Health Organization) explains it better but I’ll take a shot at it.

Basically, if you’ve been living under a rock or hate the internet, which is how I feel most days, you may not have heard of the coronavirus. Well, let me educate you, my dear friend. For you see, the coronavirus is actually a string of viruses, a whole big family, and this family are assholes who usually start out living within animals but decide that human beings are a more comfortable home for the whole family (it’s a big one) and move in at the first opportunity. Once they nestle inside of us, it is possible we start seeing symptoms linked just to the good ole annoying common cold or can show itself as the bigger kahunas like MERs and SARs, both viruses that have had their own epidemics in history.

But we want to focus on the new contender that is taking over the world like an awful game of Plague Inc., the novel coronavirus. A new virus that originated in the Wuhan district of China. Specifically, it was at a market known for selling live animals, where someone may have eaten an infected animal or been exposed to animal excrement causing the virus to spread to humans according to a Vox article I found. This same article also interestingly singles out a specific animal that may have caused this mess–the bat.

Well, knowing if it was a bat or not doesn’t really matter at this point as the novel coronavirus has gradually and steadily spread across the world causing countries like Italy, Japan, South Korea, China and Iran to go into state of emergencies and restrict travel. Not to mention that a lot of events have been cancelled such as your faves’ concerts or maybe you were looking forward to the 2020 E3 conference. I don’t know.

But as a K-pop-centered blog, I am obligated to ask the question: how does it affect our faves? Well, in a lot of ways.

The coronavirus touched down in South Korea in late February after a cult, the Sincheonji Church of Jesus, in Daegu were accused of purposefully spreading the virus through their members. Some of the said members had apparently visited the Hubei province of China where Wuhan is located before coming back to South Korea. For a while, the majority of coronavirus cases were clustered in Daegu, but now have began to spread to other cities like Busan and Seoul. Currently, there are over 7000 people infected in Korea with 66 dying from the virus.

Now, I know it’s easy to point fingers at this crazy cult whose leader believes he is the second coming of Jesus and also had one of their members violently resisting being tested, but there is more to the story that most people realize.

I stumbled across a New Yorker article expanded a bit on the blame of who to accuse on the spread of coronavirus. And one doesn’t have to look further than South Korea’s own president, Moon Jae-in.

Look, I don’t keep up with politics, though I personally witnessed a couple political protests here and there while I was in Korea and even I noticed that Korean people were not happy with the current government. President Moon Jae-in’s popularity was really low even then and seems to be getting worse. Especially when one considers that the dude was holding a jjapaguri noodle party with the cast of Parasite (great movie, watch if you haven’t yet) at the Blue House, the office and residence of Korea’s president or really South Korea’s equivalent of the White House for us Americans. Unfortunately for him, this party coincided with the first coronavirus death in the country and the doubling amount of people infected with the virus from 51 to 104. It would still take him a few days to rise the high alert on the coronavirus in the country and lockdown already affected cities.

I mean, this would’ve been great if he had followed the advice of the Korean Medical Association, Korea’s largest association of doctors, who urged the country to bar travelers from China a month previously but of course, the government didn’t listen.

Wow, what a great look for him, eh? And just in time for Korea’s midterm elections in April. Here’s to him and his party desperately trying to convince people that it was just an honest mistake and that they probably thought it would be just like the wee little flu just like another bumbling head of state we’re all so fond of.

But wait, Miss InsomniaCynic (read: Idiot), how does this affect our faves? I don’t care about stupid politics, I just wanna know if my oppars and unnirs are coming to my town?? I hear you ask, well, prep yourself for bad news, boys and girls cause the coronavirus doesn’t care. At all.

You see, I did a bit of information gathering to see in general how the virus is affecting the K-pop industry. And here’s a summary of what I have found, starting with tour cancellations and the like (links provided):

This list obviously is not exhaustive but are just some highlights of the past few weeks. Idols and their companies are having to adjust to the growing concern of the coronavirus by performing for nonexistent audiences at music shows, practicing health-conscious decisions and self-quarantining when needed. It is a bit taxing and a nervously frustrating time that we live in currently but it is needed to mitigate the spread of the coronavirus.

But of course, if you are missing you faves, you can still find them ~online~ as many have taken to sites like YouTube and V live to continue doing their activities and promotions. Artists like Yerin Baek, Winner, ITZY, NCT 127 etc. have either taken their concerts or fanmeets online. As they say, when there’s a will, there’s a way.

As we move forward with each day bringing new developments in the coronavirus, I urge everyone to practice some common sense and do your best to stay healthy. Even if the virus hasn’t spread to your hometown, stay vigilant and informed. To end this article, I will leave you all with some handy information related to the coronavirus and something to lift up your spirits a bit. I hope.

If you want to track updates of the coronavirus like its spread and number of infected/deaths/recoverys from around the world, I found a neat website for that. Just click on the picture to go.

Also, since this is the season for colds, allergies, the flu and whatnot, here is a handy table I found on Twitter providing symptoms of the aforementioned illnesses including the coronavirus:

Another thing, do not be that gullible to think that there actually think that a vaccine for the virus is coming out tomorrow like somebody in power…of the whole United States. A vaccine will take time. Thankfully, there have been many recoveries but not due to such things as weed.

Yes, apparently there was trend on social media where people were coming up with silly cures and weed was one of them. They could have just been joking obviously but after being on Twitter for only 7 months, the true stupidity of the human race as unfolded before me in ways I wouldn’t have imagined possible.

Anyways, weed doesn’t cure the coronavirus. The beer, Corona, does not cause the coronavirus. And as long as we practice some nice introverted social distancing, then perhaps we as a human race can get through this pandemic by understanding we must make some sacrifices (like missing your fave’s much anticipated concert) and being considerate of others.

Now, I shall leave you off with some feel good vibes as I will link back to an article about various Korean celebrities donating to various charities to combat the coronavirus.

Finally, I’ll leave off with a song about the coronavirus I found on Billboard list containing similar songs because apparently this is a thing now. Most of the other songs are parodies or downright silly; though, this one I found a bit cute while also actually being somewhat informative.

That’s all for now. Ciao, and stay well, my readers!