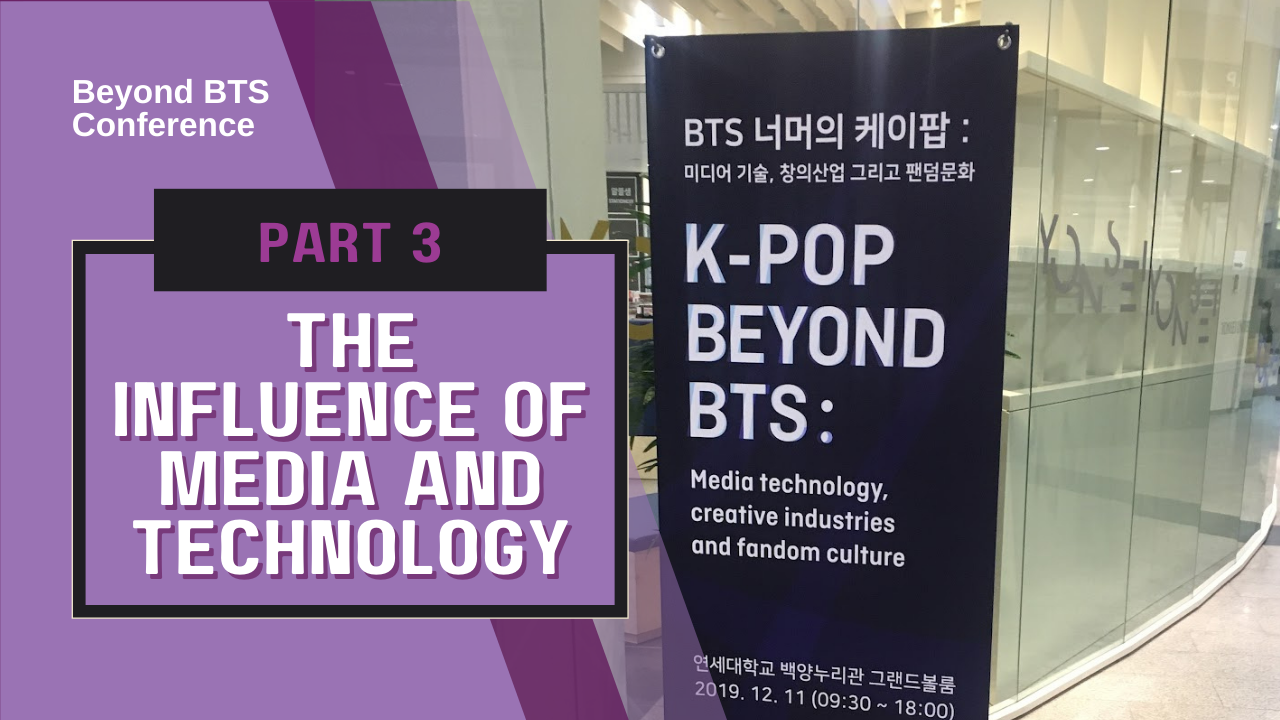 BTS, Conferences, K-pop ExperiencesLeave a Comment on Beyond BTS Conference Part 3: The Influence of Media and Technology

Literally not much happened in this part of the conference. At least, not a lot that I understood. Honestly, I was prepared to scrap this part due to the fact that this post is 3 weeks late and not sure if this even matters anymore but who knows? Perhaps someone will find it interesting. Probably not.

This actually will be a quickie because my notes from the time sucks and I honestly can’t be bothered, but at least I have pictures~ Low quality pictures, but visuals nevertheless. Is that bad as a writer? Oh well, my blog, my rules.

Part 1: UNICEF, Koreaboos, and the Wonders of Social Media

All of my bulletpoints are proving to be useless and vague at most so that’s a lesson for myself for next time to take better notes. Forgive me, I’m still new to this whole blog post writing business.

But there did seem to be a focus on the Grammys for this presentation as the presenter posed a few issues found within the music award shows in relations to BTS. This included the long-standing tenuous relationship with race along with the debacle of 2019 when Ariana Granda pulled out of the Grammys only for the Academy to call in BTS as a replacement.

Interesting considering all that’s happened up to now especially given the years Grammys and the controversy surrounding that which I covered in a post back in January – the only post I’m somewhat proud of.

Following that, the presenter shifted topics a bit to talk about the fans, not just within BTS’s fandom but in general along with looking at the industry. I actually wrote a coherent note about this section that reads:

K-pop is turning into a nearly 5 billion dollar industry. The government’s approach to cultural products as a boosting engine for the economy since the early 1990s. Strategic partnerships between the media and pop music industries.

And they’re really pushing themselves into the US industry as anyone who hasn’t been living under a rock knows. Currently, they are really striving to make Korean pop a new music genre in the states whether you like it or not.

I’ll be honest, I remember this presentation confusing me quite a bit when I was sitting there in that conference room. The presenter came up and was connected BTS to Fordism which was a concept I was unfamiliar with but thankfully, I actually defined it in my notes:

Fordism refers to the production systems in manufacturing. Henry Ford, when he was making model Ts, he established a manufacturing line and based on this system, the cars grew in quality and became mass manufactured.

Gotta give the presenter a bit of points for adding a unique spin on this topic though it didn’t make the presentation any less boring. Somehow I managed to take quite a bit of notes.

I believe the next couple of notes is in reference to this slide which shows some of the criticism towards the idol system. The Korean in order from left to right in English is factory + product + robot + conformity = identity. All words associated with the K-pop industry and its idols from time eternal.

In relations to this, I had a note just saying–Crisis: Rigidity and conformity. Sought only highest level of efficacy faced bureaucracy.

As to what that means, is a bit of a guess due to my shoddy note-taking but given how manufactured the K-pop industry can be, I suppose the presenter was getting at that despite this stigma of the industry being superficial, rigidity and conformity is necessary for the high-ups to remain happy. In other words, things are gonna stay exactly as they are because idols must be commoditized and put out there as products because it is what those in power perceive to be necessary for society. And who are those that are in power?

Of course, there is more in power and making those ridiculous decisions with your fave idol groups that you vent about on Twitter, but these three are the CEOs (or former in YG’s case) of the three biggest entertainment companies in South Korea.

Top three CEOS and the little notes I made for each:

Whether you agree with this dude’s brief analysis of the three men above in regards to their company is something for you to decide. As a neophyte (sorta) to K-pop and as one who has never had a bias group from any of the above companies, I don’t really have many preconceived biases against them. Though I don’t like YG. Enough said.

Still, the presenter pointed at that this entertainment hegemony is coming to an end as other smaller entertainment companies like BigHit, KakaoM, and dingo are now rising up to rival the big three. Time will tell how well this goes.

I literally have only two short notes for this presentation and can barely remember it from memory alone. You’d think by the title alone that it would be interesting as I swear every comeback season I see ARMYs whining on the internet about YouTube deleting BTS’s views on their latest song. But like, does it really matter when BTS’s fans especially are stream hungry and will do everything in their power to get millions of views for these boys? So what if YouTube knocks away a few million views, y’all will get them back again soon anyway. As if BTS really needs it at this stage. Honestly…

I went on a mini tangent there because literally I have nothing for this section besides this:

-Choreography and quality is involved together as BTS grows as artists.

-Asked many in IT about YouTube algorithm but no one was sure how it worked.

In short, the YouTube algorithm is stupid and whack and we are all being played for fools.

I actually want to leave some closing remarks as I finally wrap up this conference three part series. Despite not fully understanding some of the presentations and thinking that some could have actually been fleshed out a bit more, I wanted to really emphasize that these presentations at least taught me one thing: these entertainment companies really know more than you realize.

Really, one of the presentations that surprised me was the one about black female fans within the fandom. Hell, I thought we were non-existent to them or at least the company appeared to give zero fecks about us. You have to remember that this conference was sponsored by BigHit themselves and was recorded for future reference. The reason why I want to point this out is because I see a lot of fans, specifically company stans, try to defend the companies when they screw up or try to be like, “They’re Korean, they don’t no any better.”

Seriously, in my experience Korean CEOs and those in power in these companies alongside these CEOs are just the equivalent of a bunch of white old guys who haven’t quite realized we live in the 21st century. Best to keep that in mind next time you want to rationalize the actions of a company whether that be JYP or BigHit (a company I seem to see the most stans for…oh, perhaps that can be a good post in the future?).