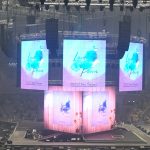 I wasn’t planning on making this a blog post so I apologize for how sloppy this one may seem along with the lack of pictures and videos due to certain restrictions at the concert venue. But, I decided someone out there may be interested in my IU concert experience in Seoul, so here I am writing it up for that someone’s benefit.

Now, let me preface that I’ve never been to a concert before so I’m still a total noob when it comes to concerts and what to do for them. Thankfully, I had my K-pop professor who was also going and who is the only reason I was able to get a ticket in the first place.

You can see that the ticket price was originally 110,000W which is the equivalent of about $94. However, because it was a resell ticket, I had to pay an extra 70,000W for a smacking $150 which is more expensive than I would’ve liked but the cost was worth the experience.

D-day was November 23rd, Saturday, and I was smacked with excited nerves and anticipation as I waited for my professor’s text message saying she was ready to pick me up. That woman was a godsend, honestly. Not only did she drive me to and from the concert that day, but she went above and beyond what was needed of her:

2. Helped smuggle me into the concert. To explain, because my name didn’t match the name on the ticket, the concert staff could and would turn me away. I personally saw one girl get rejected because she possibly had a reseller ticket, too. Yet, this same girl came back and actually got in. How? Not sure, maybe she managed to slip through a different entrance or maybe she was just charming enough to work her way through. Whatever the case, she got in and through my professor, I got in, too.

3. Translated some of the things IU said and texted me during the concert in order to make sure I stayed for IU’s en-encore, an encore after her encore which was perhaps one of the better parts of the evening because IU came out in casual clothes while taking song requests from the audience and allowing us to photograph and video record the concert which was restricted before.

Besides my professor being a saint, the overall concert experience was really great and I am definitely happy and proud to claim it as my first concert experience. Technically speaking, the KBS Music Bank concert in Gangneung was more of an outdoor music show than a concert, so I don’t count that one, although that was a good experience too despite waiting about 5 hours for it to start and not being allowed to sit down throughout it all. Well, okay, maybe it wasn’t that great but seeing who performed was pretty worth it.

Yet, IU’s concert was another experience entirely. First of all, as soon as you went into the venue and found your seat, you were greeted with this butt buddy:

And yes, you can take it with you once you leave – it’s free. My professor forgot hers somehow which is an outright shame if you ask me, but hopefully some fortunate soul got it (probably to pawn it off for money honestly).

I heard from my professor that this is common for IU, but not other artists apparently? Guess I will have to see if I attend more K-pop concerts in the future which of course, I hope to do so.

Another handy item to have is the 응원법 papers or how-to-cheer papers so you don’t get lost when the rest of the audience starts chanting throughout the song.

Unfortunately, it is in Korean so if you can’t read the language then you’re kind of screwed. Fortunately, I can read Korean, but despite that, I still managed to get lost a couple times. It was still really enjoyable to sing along and feel that rush of being part of something bigger. It was kind of like a moment of solidarity that I felt with the audience and IU in that moment.

It was a bit incredible because I’m sure I was the only black foreigner there. Although, no one really batted an eye at my presence either which is what I expected but perhaps I was expecting a little something since I wonder how many black fans like IU and how many of those same fans come to Korea and are able to see her in concert? Who knows? But the Korean people seem to be used to it, at least in Seoul. Seriously, they really really don’t seem to care. As long as you don’t make a fool of yourself, okay kids?

Because I couldn’t record or take pictures during the concert, I can’t remember all too well the whole order of events. I also took no notes because again, I was not expecting to turn this into a post since I really just wanted to enjoy being in the moment instead of furiously taking down notes during the whole thing. Plus, despite the seats being softened by the cushion, the seats were pretty squashed together so honestly there wasn’t as much breathing room as you wanted. It was doable, but you just had to hope that the person next to you was tolerable or your whole concert experience could be a bust. Thankfully, I was in between a girl who appeared to have come solo, and a couple with the man sitting next to me. Both were alright, I suppose. My professor had another seat on the other side of the venue so unfortunately, we were separated but that was okay.

Let me sidetrack a bit by just appreciating my view of the stage. For a reseller ticket, it’s not too shabby. I also took into consideration that the other concert that I was vying for, which was for BTS (hah!) a month ago at this time, would just gift me seats that made the boys look like tiny ants on stage. There are the screens, I know, but it would still be nice to see them somewhat up close, but perhaps I am spoiled since I saw them before at Mcountdown rather closely. And let me tell you, once you see your faves up close like how I saw BTS, Dreamcatcher, SHINee, and more on that music program, you can’t really go back to being satisfied with seeing them ant-sized especially considering how much lost money your bank account is crying over.

Apparently, according to my professor, who had went to the BTS concert, I hadn’t missed much. In terms of the vocalists, I mean. She mentioned how it was clear that the vocal line of BTS weren’t as up to par as ARMY makes them seem, at least live. She praised the rap line, however. That made me feel better about missing out on the concert.

But look, this leads me to my next point before I sign off on this post. I don’t really agonize over vocals like that. I just came to enjoy the show and that is what I got with IU. Sure, she is of course a very talented soloist, but I also like her personality and what she stands for as far as I can see. It’s a carefully crafted image which is understandable if you are aware of what IU has been through in her 10+ years in the industry, but it is an image that I find refreshing and quite unique. For example, at one point during one of her encores, she mentions Sulli, who we all know passed away this passed October. IU mentioned how Sulli would come to her Seoul concerts but leave before the en-encore, if I am recalling correctly what my professor told me. Unfortunately, in the moment IU was retelling this, I didn’t catch that. My Korean is still not that great sadly but I’m striving to get better in order to capture and understand moments like this for a better firsthand experience.

To add onto that, for me, while I like IU a lot, I also feel so incredibly inferior to her. When I went to her concert, I was still getting over this depressive spell that had hit me in the week or so before. I feared that seeing IU would just sort of break me considering how much I compare myself to people and how easy my brain could use IU to invalidate myself. Thankfully, the only thing that really came out of it was a renewed appreciation towards IU and a less idolized view of her. IU is perhaps the only idol I have actually ever idolized to some degree but due to my mental health, it took a bit of a toll until that fateful concert day. It’s kind of funny how I view her in a more healthy way. So, I have to thank Miss Lee Jieun and wish her the best in whatever future endeavors she pursues whether that be through music, acting, philanthropy. etc.

I also would definitely recommend to anyone to attend an IU concert and just relax and enjoy the concert. And don’t stress out over vocals unless your ears are threatening to bleed. I’ll end with a picture of IU rocking it in causal wear and a Twitter thread of the en-encore:

One Reply to “My First Concert: IU Love Poem”