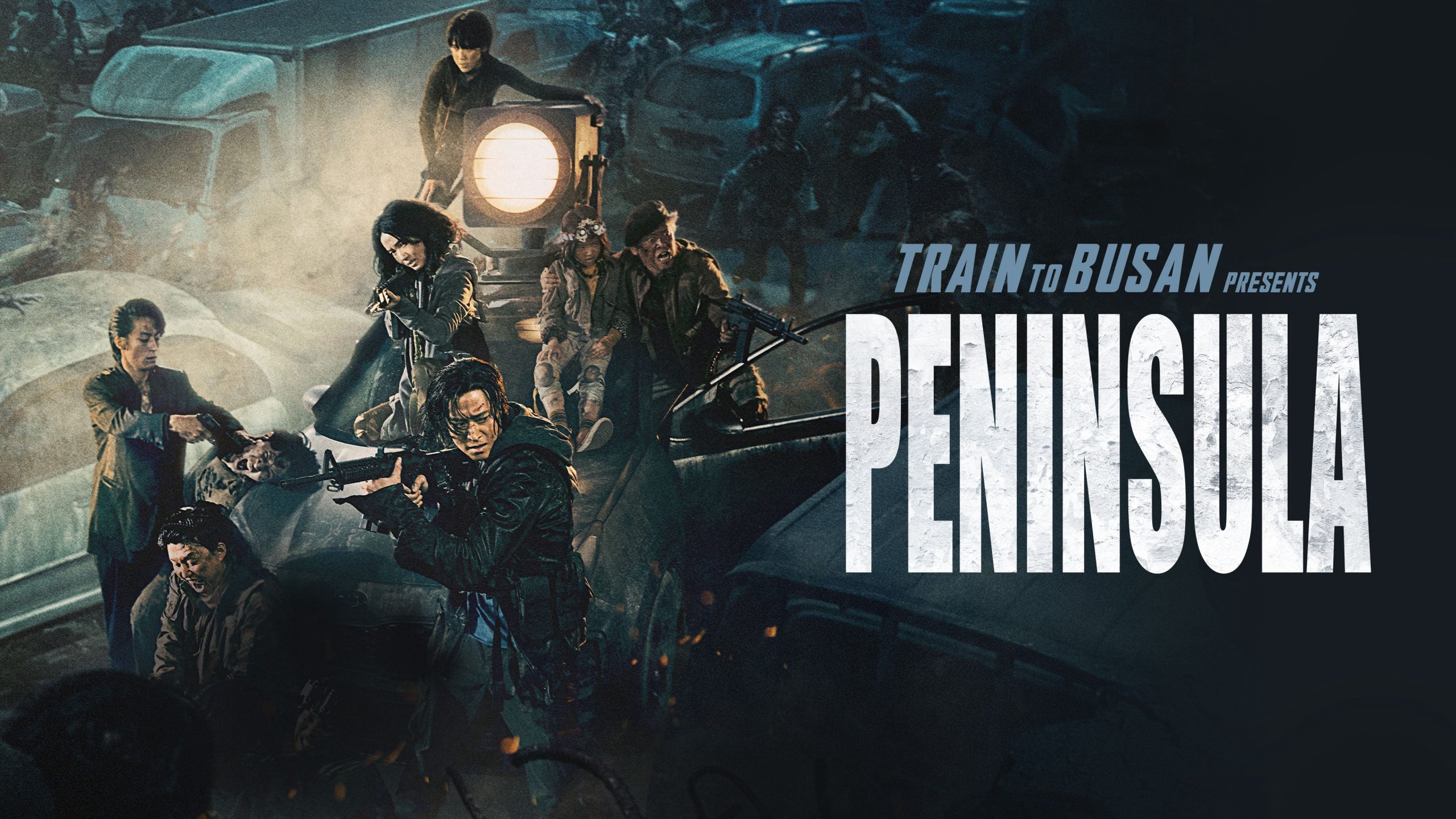 "Reviews", MoviesLeave a Comment on Why Peninsula is no Train to Busan

Note: Minor spoilers for Peninsula. I’m also not an expert at film reviews. The extent of my film knowledge is two semesters of screenwriting.

Last night I ended up watching the Train to Busan sequel called ‘Peninsula‘ with some friends and seeing how I’m making reviews a thing now, I decided why not? Plus, I had to pay for the thing on Amazon, so I figured I wanted some sort of compensation. As the title already suggests, it was definitely not quite up to the standards of its predecessor.

For those that don’t know Train to Busan (really, where have you been??), I’ll give a quick summary. The story follows Gong Yoo‘s character who plans to take his daughter down to Busan to visit her mother who he divorced some time ago. Even before they get on the train, the movie provides plenty of scenes to build up the suspense and thrill the movie will offer as the zombie infection is already spreading throughout South Korea. Their fate on the train to Busan is sealed when an infected woman boards the train unbeknownst to passengers and crew alike until she bites one of the crew and it quickly spreads.

For a movie that spends the majority of its runtime in a train, Yeon Sang-ho, the writer and director of the movie, keeps things spicy and engaging as you are plunge from emotionally moving scenes to blood pumping action scenes. You grow pretty attached to each character since the director gave scenes that conveyed who they were, their background and some personality in a succinct but critical amount of time. When the movie ended, most people felt moved to tears or at least could acknowledge and respect that a zombie movie wasn’t just filled with action, action, action interspersed empty emotional beats to round out the story.

On the other hand, I felt like Peninsula was just that.

With an IMDB rating of just 5.4 compared to Train to Busan’s 7.6, you kind of wonder what happened? Did it suffer from sequel syndrome where it just inevitably fall flat compared to Train to Busan? Did the director and writer change (Nope, but the whole cast changed)? Or maybe people’s expectations were too high from the almost masterpiece that the previous movie turned out to be? Is it bots hijacking the ratings system and giving it low marks??

Well, after watching it, I feel like I can provide my own personal opinion of why Peninsula doesn’t really stack up to Train to Busan as much as you think it should have.

Peninsula takes place 4 years after the events of Train to Busan and in that time, South Korea has basically been decimated. The only place in the peninsula (get it?), is North Korea, but of course, they ain’t having that mess. Literally, North Korea is mentioned just once and never again which makes me wonder why it didn’t have a bigger role in a movie titled Peninsula especially considering they dedicated a scene to it but perhaps they wanted to answer the question of what happened to North Korea in all this? By ‘they,’ I mean, Yeon Sang-ho, who also directed and wrote this movie.

Yeah, I don’t know for sure, man, but instead we are forced to turn our attention to our hero in Hong Kong after escaping South Korea with his family 4 years back. Unfortunately, out of his sister, brother-in-law, and young nephew, only his brother-in-law escapes the zombie attack that decimates the human population of the boat they were escaping Korea in. It was an interesting scene due to the fact that it showed a child, the nephew, turning into a zombie when the first movie carefully avoided showing child zombies. In addition, I thought it was an good anticipator in setting up what would be a good movie since we’re already being thrown into the thick of it.

It’s really the use of showing a child turn along with his mother who can only helplessly watch and make the tough decision to stay by his side or leave him that does help wrench the gut. Yet, after this scene, I feel like the movie falters in delivering a satisfying emotional impact as we’re thrown into action after action after action. Of course, there is down time implemented here and there that helps us become more familiar with the characters but I think the problem with this movie, is that there are now more characters we need to keep track of and far less time that was put forth in making them solidify in our mind as three dimensional people.

Perhaps it was the scenes themselves that didn’t quite deliver. I’m not sure, but if you wanted a movie in the same emotional vein as Train to Busan, this probably isn’t for you. I’m not saying you won’t get attached to the characters because everyone is different but I think the emotional pay off is just different. Like, I did like the heroes of this movie and the bad guys were proper bad guys but I just don’t know, at the end of the movie, I didn’t feel as emotionally moved.

Now, if you want a movie that is filled with action, then this is for you. I didn’t find the action scenes that bad. I mean, they were about the same level as the ones in Train to Busan. That’s the thing, I don’t think the cinematography took a dip though one of my friends said the actions scenes reminded her of how game cutscenes will look so much better than like the rest of the game – it looked a bit too cartoony for her basically. Shoutout to you, by the way, you know who you are though I don’t think she reads this, haha.

The main reason she may have said that is because there are a quite a few car chase scenes either between these gangster-like thugs or the zombies or both. It’s kinda incredible, but I’m one that is impressed by even a bit of ‘cool’ action so I’m not sure my opinion carries much weight in this department. Still, give the action a chance in this one.

I haven’t even properly introduced the story yet, have I? Well, after enduring a rather harsh life in Hong Kong for a time, Dong-won’s character and his brother-in-law have a chance to make some ‘hard’ money by going back to the peninsula through Incheon to find a truck purported to have bags of cash. Dong-won doesn’t want to go at first, but eventually tags along after his brother-in-law, who’s deep in the shits with survivor’s guilt, makes him feel bad for basically keeping him alive. The two are teamed up with an ahjumma and a guy around the same age as them, and yes, neither survive the movie much less the next 20 minutes as things go wrong just as they find the money. It is here, we are introduced to this group of thugs called Unit 631, a former military group, who turned crazy and corrupt. Hmm, some social commentary on authorities, here?

Anyway, the poor brother-in-law, is the one who unfortunately gets caught up with this group while Dong-won is saved by the two sisters who takes him back to the house their grandpa and mother live in. This leads to splitting the time between showing what’s going on with Dong-won and his group and the brother-in-law and his plight being the playtoy amongst others at this encampment run by a Captain Seo, another character introduced a bit later on who turns out to be rather integral to the end events of the movie along with his right hand man, Tiny Tim Private Kim.

To make a long story short, it all comes to a climax as our heroes manage to steal back the truck that was at Captain Seo’s camp but are pursued by Unit 631 up until the harbor where Captain Seo proves himself to obstruct their passage back to Hong Kong as he successfully steals the truck and takes off into the sunrise. There’s a bit more obviously, but that’s as far as I will spoil. Though I will say that Peninsula has a happier ending than Train to Busan did. Rather you like that or not, is up to you.

Also, side note, the UN shows up at the end of the movie and considering that this movie had more white people in it (wait, Train to Busan had like 0), I couldn’t help but think of white saviour complex when I saw the UN forces touchdown to scoop up these poor Korean people whose peninsula has been ravaged by this terrible zombie virus. Granted, one of them didn’t look white, but still couldn’t help thinking that. Maybe I’m looking too deep into it.

Ultimately, I would recommend watching the movie if that all sounds fine and dandy to you. Personally, I wouldn’t mind rewatching it again if need be, but I can also see why there are people who are unsatisfied with this movie. I suppose it just depends on what you are looking for in a sequel. Or perhaps you judge even sequels as its own standalone movie. I went into Peninsula thinking I should do just that but even as a standalone movie it lacks some aspects that I won’t get into as I feel I’ve written enough. If I had to give a rating to this movie, I’d give it a solid 6.5 – above average.