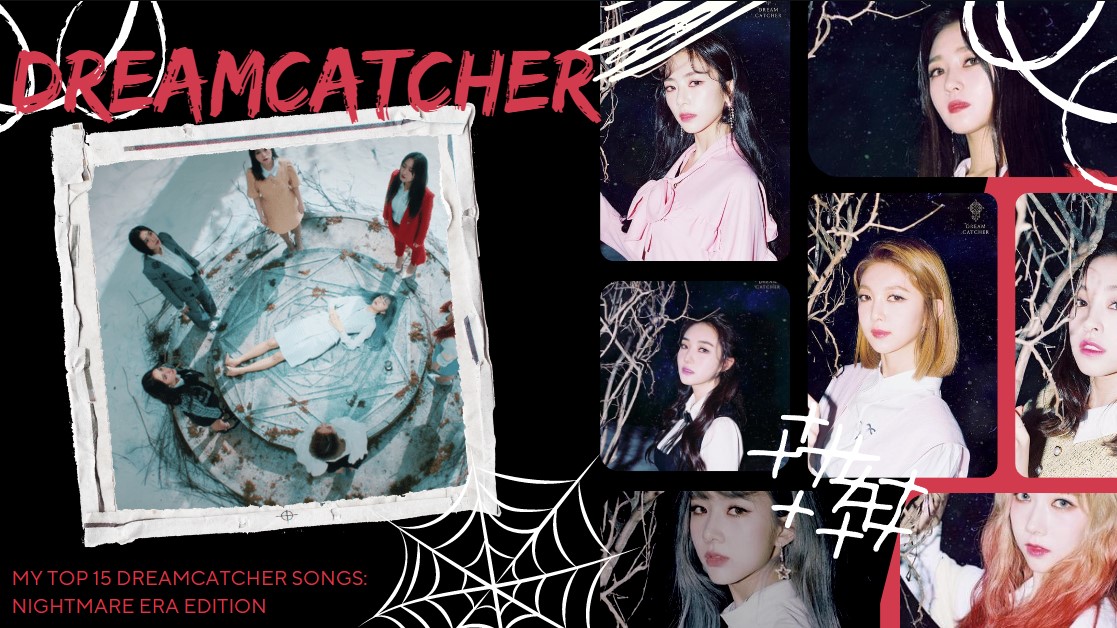 Hello, all! I am back with a listicle on my top 15 Dreamcatcher songs of the Nightmare Era. Why? Because Dreamcatcher is still my top girl group in K-pop (though I haven’t listened to some of their more recent stuff – forgive me!).

But for those that don’t know, the Nightmare Era consists of their debut single album, Nightmare – Fall Asleep in the Mirror, Prequel, Nightmare – Escape the ERA, Alone in the City, and Raid of Dream. This list includes songs from these mini albums and singles but I recommend listening to every song from this era because all are bangers in my opinion.

But first, who are Dreamcatcher?

Dreamcatcher are a 7-member group that debuted originally as MINX under the company, Happyface Entertainment in 2014. MINX had, well, a completely different concept than Dreamcatcher. Their concept was more cheery and bubblegum pop which was very similar to other girl groups at the time. Perhaps this is why they didn’t last long as they only released their debut song, Why Did You Come to My Home? and their EP, Love Shake (below). I recommend listening to both just for the whiplash you’ll get seeing how different they are.

In 2017, they re-debuted with the new name, Dreamcatcher and new music concepts mainly presenting themselves now as a rock metal group with darker vibes that is very fitting for the Halloween season…oh wait, that just passed but you know what I mean. In addition, new members, Handong and Gahyeon, who weren’t part of the original line-up were added. Here’s a quick member profile to be a bit more acquainted with the Dreamcatcher members:

And with that, I’ll list out my favorite songs in no particular order although I did list them out from their debut album to the last nightmare era album. Well, except the first one, but with good reason!

You and I is from their Nightmare – Escape The ERA EP and it’s the reason I got into Dreamcatcher in the first place. It was my first song that I happened to come across…somehow. Truthfully, I can’t remember exactly how I first heard it but it was probably on YouTube.

The song has a metal rock vibe to it with the girls declaring that no matter what, they’ll be together with you forever. Watching the MV gives off quite an alluringly creepy yet mystifying vibe that is present in most Dreamcatcher songs of the era. I highly recommend watching the MV up there.

Coincidentally, I was studying abroad in South Korea at the time I got into them and just weeks later, I got to see them perform this song live when it first came out back in 2018 at a music show called Mcountdown. I wrote a little bit about how I did that in a post explaining music shows in Korea.

This one is also kind of a cheat because it’s their debut single. But hey, check out this description of the song from the Dreamcatcher wiki:

The characteristic rough sound of metal and the addictive chorus are the points of appreciation. Dreamcatcher’s images of nightmares and evil spirits are melted into the lyrics, and it is characterized by a sense of tension and rhythm as if playing a tag. The story of an obsession evoked by a love that has grown too large.

Seriously, you all should check each song’s description on the fandom wiki because they’re just great.

This MV also has a rather brilliant but dark storyline that starts the Nightmare. It’s a really intriguing one but not something I will get into since I’m no lore specialist, but if you’re interested I’d urge you to look it up.

악몽 – Fall Asleep in The Mirror

I can’t say much about Good Night as it’s quite similar to Chase Me except some places may feel as if it “rocks out” harder than other places. Also, the story from the previous song is picked up once again here, so that’s neat.

Full Moon was described to have similar vibes to You and I under the latter’s section on the fandom wiki and I agree. This song was released on January 12, 2018 which was Dreamcatcher’s 1st anniversary as a reborn girl group. If you liked the sound of You and I, then I’m sure you’ll like Full Moon.

Wake up sadly didn’t have a description on the wiki which is a travesty. Who’s in charge over there? Anyways, this song describes the girls searching for another dream and seems to be urging the listener to “wake up” and join them on their journey in search of a new dream.

Fly High is the titular track of the Prequel EP and thus as a lovely MV that shows us the story of the girls before they became the Nightmares shown in Chase Me and GOOD NIGHT. Again, look up the lore if you want details. Fly High still carries a consistent rock metal sound but it has a bit of a fresh pep to it’s vibe. Is it the colors? It feels lighter than the other two darker songs, but watching the MV definitely makes you feel something a bit more sinister is under those soft palettes of colors.

Alone in The City

The rock and metal sound is still heavily felt in this 2018 titular track. I always want to rock my head back and forth at the “What! What! What!” parts like I’m some kind of bobblehead. The beat is just that addictive. The story of the MV tells us as well that the girls have found their way out of their dream and into reality again, but the journey is not ever – far from it.

The title is self-explanatory. The lyrics of the song alludes to Alice in Wonderland but imagine Tim Burton’s version but better with 7 sexy ladies mysteriously alluring you with dark charm to join them in their Wonderland. The song is softer than their usual heavy rock and metal sounds. The beat sounds more mesmerizing and almost lazy (in a good way) as the girls’ voices melt sometimes distortedly to entice you and your senses.

Okay, I love this song a lot, so I’m heavily biased.

Similar to Full Moon, Over the Sky was released as an anniversary song for Dreamcatcher’s 2nd year together. Not much else to say because the sound is what you would expect from Dreamcatcher. The lyrics also feel like a fan song. One of the better ones out there though.

The End of Nightmare

For this song, I’ll let the fandom wiki do the talking:

Dreamcatcher’s new song ‘PIRI’ expresses the emotions of modern people who want to escape from the loneliness and anxiety left alone. They expressed their SOS signal through the subject of ‘flute’ in the lyrics. If there is a new change, it is that it gives a sense of urgency with a beat that is different from the previous fast-tempo active songs. In particular, the point of appreciation is the repeated melody line with the sound of the flute and whistle that catches the ears.

The flute in question is the “piri,” a Korean double-reeded flute instrument that is used in traditional and classical music. Similar to an oboe, it tends to make a lighter sound.

If you’re a bit tired of the heavy rock sound, uh, this is still it but with the added addition of the flute – it definitely is a new flavor at least.

The girls just sit on their couches and sing and somehow it’s still better than other K-pop MVs (mainly the flashy ones that have too much going on). This song has a bit of a funkier beat to it or really it just sounds different. Mainly due to the fact the rock metal sound is not really heard, but it’s still captivating in it’s own way.

In Deja Vu of the painful reality we face endlessly, it contains the promise of an existence that we want to keep even if we give up everything. The magnificent orchestration following the beautiful piano melody and the choir sound harmonized with strong metal show another new color in the music style that Dreamcatcher has been pursuing. In particular, the chorus part’s ‘Oh, Deja vu’ makes you feel a scream resounding in repeated pain.

Just as the description says, Dreamcatcher’s sound started to move in a different direction with Deja Vu. The metal sound is still there but other elements are present such as the beforementioned piano melody. I wouldn’t say a pop sound is taking over but for those who thought the metal was overpowering in their earlier songs, Deja Vu may be a nice balance.

14. The curse of the Spider

Ah, The curse of the Spider sounds like such a killer title for a song and it doesn’t disappoint. There is a bit of a shouty bit starting in the beginning with Siyeon saying “Yeah let’s get move out yeah!” which kinda sounds a bit awkward to an English speaker’s ears but other than that, it’s a pretty solid song.

This song holds a soft spot in my heart especially because there is a special clip that goes with it but you can only find less than quality versions of it on YouTube. Why? Because the special clip was only shown at Dreamcatcher’s first in-person fan event back in 2019 and I was there to see it! I feel honored to see it directly and with the girls.

And lastly, a Christmas song! No, I’m just kidding – there are no Christmasy feels hidden in this song. In fact, the song delves more into sounding mystifyingly dark. As a non-metal rock track, which is very clear from the beginning if not the EDM breakdown at the end the song, it’s probably one of Dreamcatcher’s more unique songs. A very interesting analysis was written by a fan on Dreamcatcher’s subreddit here, if you want to read it.

And that’s it, folks. I hope someone found this interesting. Maybe I even successfully converted someone into a Dreamcatcher fan. Regardless, thank you for reading all this and see you in my next post!