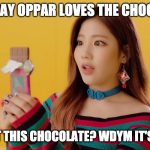 Opinion, The Black K-pop Experience, Think PiecesLeave a Comment on Black Women and their love for K-music

From the last post in this “series” I posted a months and months back, I mentioned that this series was inspired in part by a mini thesis paper I had read about Black YouTubers who reacted to K-pop music videos and how that affects their identities. One quote that I wrote down when I first read it is something that I want to share with you:

Pretty fancy wording for the thesis in question but basically what I want you to take out of this is that black women and Asian/American women are being seen as lesser than their male counterparts based on stereotypes such as being too masculine or too feminine respectively. Considering that this is focused on black fans, I will redirect my attention to simply focusing on that statement about black women as it reminded me of a little known controversial site called Kmusicandblackwomen, a site that I, dear reader, used to perused back in my younger days…for like a month, I swear…or maybe it was 2?

Regardless, for those unfamiliar, Kmusicandblackwomen is a tumblr website that focuses mainly on black girls and womens’ interactions and stories between their favorite idols (exclusively male) though it also supplies everyday interactions between black girls and Asian men in general (well, there’s a focus mainly on East Asians, Koreans in particular). There also are posts of interactions between these male idols with black celebrities cause we gotta live vicariously through someone because we all know that we’ll never meet our oppars.

I won’t provide links but you can check the site out as well as her YouTube of the same name. A simple Google search of Kmusicandblackwomen should bring her up along with probably more in-depth commentary on her site. Personally, during the time that I browsed her site back in the day, I couldn’t help but feel somewhat happier, at least for the other black girls who expressed euphoria and pleasure over their favorite idols amicably interacting and chatting with black people, specifically girls. I could sense the general sentiment of validation and acceptance that these girls felt especially since a lot of them knew the pain of being seen as unattractive and ugly based on the Asian beauty standards. Typically, Asian society prizes pale skin, a thin waif-like figure (or sometimes the opposite–still thin but with a cute cherub, not fat, face) with gentle features that could be perceived as cute or pure. And of course, black women are seen as the exact opposite of that. In general, black women are perceived as more masculine than really any other type of women out there and tend to be more paradoxically either really sexualized or ridiculed for our thickness and curves. The site, Kmusicandblackwomen appeals to easing the fears and worries that many of these black girls feel towards their idols, most of whom were born and raised in a country that generally appear not to accept black people in the way that whites or Latinos are accepted.

Here is the About page on her tumblr outlining why she created the site:

Honestly, when I first read it, I thought how nice it was to create a safe comfortable space for black girls to hang out and discuss their love of K-pop and K-pop men without judgement and the stress of haters. It had pretty noble beginnings and good intentions. I would remind you to let this about page sink in as you continue to read further.

Backtracking a bit, I do find it a tad ironic that these same idols, who some of these girls worry may or may not like them due to their skin color, grew up with the standards outlined above and succumb to molding themselves into becoming nothing short of being pale gods and goddesses who are constantly reinventing themselves in such a very competitive and image-focused industry where even a stray hair can be mocked by netizens across the web. Because idols literally have to force themselves to look and act like actual beings to idolize, many girls fall into the trap of worshipping them for their looks, talents and personalities. I’m not saying everyone does fall into that trap, but I do feel like most people can relate to having a bias or two that completely wrecks you. You’ve probably saved pictures of them on your phone or watched video after video about them or fantasized about meeting them. Yet, I feel with a site like Kmusicandblackwomen, many of these girls felt the need to seek validation through these idols because they worried that in an industry that has no one looking like them nor many who interact with their biases on a regular basis, seeing their fantasies and hopes come to life is relieving.

Despite this, the site is layered in controversy and problems as many have pointed out the fetishization and over-exaggeration that appears rampant throughout the site. I won’t go into details because I just can’t be bothered nor do I want to be the one to appear to dish out any hate. I’m still a small site and I highly doubt that Kmusicandblackwoman would care what I say (if she even found this) but from what I’ve gathered she has been known to zealously defend herself in ways someone of my current disposition can’t handle right now. Though, I did do a bit of my own research by watching a few of her videos on YouTube and perusing her tumblr, and I did find myself cringing over at least 50% of the content now. I’m not sure how prevalent this is these days but before, I recall seeing quite a few posts of her and her followers saying a lot of idols are apparently into “the chocolate” if they do such things as put a black artist’s song on their playlist or do a little fan service with a black fan–fan service that is usually on the flirtatious side. Still, I will give her that she does dish out sound advice to her followers from time to time and ultimately I would like to say that she means well, at least when she first started the site. Now, it appears a lot of people, even other black girls are calling her out for multiple controversies and problematic nature.

For sites like this that feel the need to exist for the mere fact that a minority feels so undesirable towards a specific race that they feel the need to seek validation and vicarious comfort through such acts as the ones described above is something. I mean, has anyone seen such a site for white or hispanic women? At least none as prominent as KmusicandBlackWomen. Although, if there is such a site then I hold the same feelings I would towards KmusicandBlackWomen–that it’s sad a site like that should feel the need to exist. Yet, can I really blame these people? I myself admitted earlier that I felt happy for other girls who felt vicarious gratification towards seeing other black girls getting to interact with their biases who then reacted to these girls favorably in turn. Or how happy they feel when they see that their bias likes a black artist that they themselves like (or may not but seeing them like any black artist is enough).

I would like to point out that I am not shaming this site for doing what it’s doing though I understand how it can be cringe or perplexing to others. I also understand that the owner of the site has been in hot water plenty of times for her behavior and things that she’s said and done. If you’re interested in knowing more about that, then by all means look it up and browse her website or forums about her, but this is not the purpose of my post. I’m not here to spill any juicy tea, I’m writing this to bring a bit more awareness to sites such as this and the general reasons why a site like this is still thriving today. Admittedly, it’s gotten a bit more chill, sort of, but the general purpose is still the same.

As for me, I haven’t frequented the site since those couple of months or so back in 2015. Apparently, according to some people, that was the time when things on the site weren’t as bad, but I do remember seeing posts of fans submitting themselves to be paired or shipped with their bias. That was quite cringe. Oh, and this was a thing:

But to be honest, for me, her blog actually does the opposite and doesn’t make me feel any better about myself anymore. Instead, I feel as a black woman even more ambivalent about my race, my skin color, and how others perceive me. For years, I’ve struggled majorly with accepting the fact that I have unwanted skin that is as dark as bitter coco and a physique that is more curvaceous and thicker than what’s the accepted standard of our society. I can’t remember the last time I even really really properly looked in the mirror at myself with any sort of affection. Perhaps that is why I was first attracted to the site and is now the reason why it fills me with a troubled ambivalence that makes me question why does it have to be like this? Why do I have to feel like this? Does seeing these idols, my faves, interacting with girls like me fill me with a relieved sort of glee? Not going to lie, it did–initially. Though even then, it was mainly for any and every other black girl that I felt deserved to feel better about themselves with their faves. And now, with the decline of my mental health and the increasing questions of my identity as I face college graduation and the next step of my life, I feel somewhat empty at seeing an idol even my biases, who are just some Korean guys I don’t really know, appear to be all for “the chocolate.”

Overall, if I had to summarize this post up with a general sentiment, I would say that one doesn’t need to feel that he or she must feel like it’s okay to be themselves only because oppar or unnir says it’s okay through some vicarious interaction they had with a person who looks like you. Learn to feel comfortable in your own skin for yourself. It’s definitely a lot harder to actually do, I should know since I’m still fighting that battle myself to this day, but once you do, the need for you or anyone else to go on sites like this won’t be there anymore. And the need for someone to feel like they should create a site like this because a whole group feels unloved or looked down on. Hopefully, in the future we can invest our energy into something greater.