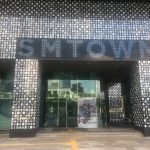 K-pop ExperiencesLeave a Comment on SMTown Coex: An Exhibition of SM Stars and other Hallyu Tidbits

I got the opportunity to go to the SMTown Coex a few days ago and going around and seeing the different floors of the main Coex building dedicated to SM Entertainment stars such as Red Velvet (shout out to Joy whose birthday is today at the time of writing this), Girl’s Generation, SHINee, Super Junior and more, it was interesting to see just how they were exhibited and what an SM fan can do there to entertain themselves while getting the good merch of their idols, of course.

The ground floor just has some screens showcasing a song I didn’t know or really cared for, so I took the escalators up to the next floor which housed the SMTown Store, so you don’t even have to waste time looking around to find merch for your SM collection back home. But geez, SM doesn’t waste time in pushing that money hungry agenda, huh?

Anyways, the store was fine. It had a variety of merchandise from socks, to perfumes and colognes, to little fans plastered with your faves faces on it, to everything in between.

To be honest, while I do listen to SM artists, Red Velvet in particular, I don’t really stan any of them like that so I wasn’t compelled into buying anything except one thing:

What can I say? I was hungry and this looked the most appealing. Plus, I liked Sulli and wasn’t sure why the pomegranate of all things was specifically her addition but I got that along with the apple version and went on my merry way.

The whole Coex is 6 floors though I saw that the last floor is blocked because apparently they’re preparing a VR theatre so look forward to that! Each floor landing as some sort of mini exhibit as you walk to the entrance of either a store, museum, cafe, or etc. depending on what floor you’re on.

For instance, one exhibit showcased the outfits worn by Red Velvet in Power up and outfits SHINee wore in Good Evening. Pretty eye-grabbing, I suppose. It was interesting to see the outfits up close. There was also NCT’s Cherry Bomb outfits but I wasn’t about to overload too much on these type of pictures.

There was also an exhibit showing some of the weekly music awards along with a display showing major awards from like MAMA or something, but we all know that these awards don’t really matter all that much, right? Still, some of these trophies sure are pretty.

Anyways, the next stop was the SMTown cafe and store. Yes, there was another store on this floor but this store specialized in mostly food and drink products as seen below.

Honestly, we all know that SM just has to slap the name of their artist on anything to tempt fans to buy their products to brag that their Hibiscus tea is a Red Velvet brand or that their chocolate is branded by TVXQ and that’s all that matters. Heck, maybe the idols even love these chips and tea themselves. Unlikely, but whatever you want to believe. Though, I’m not above this either, haha. For instance, they had some gatcha machines giving out snap bracelets and little tattoos and such, and if it wasn’t for the fact that these were also slightly overpriced, I probably would’ve went for it.

As for the cafe, the products were equally enticing to buy but because I was being money-conscious (hah!), I opted out, but maybe next time just to see if it’s actually worth the price.

Weirdly enough, this place also sold Western movies and albums as well. I can only assume it’s just SM wanted to make more bank by selling these products in their Coex to fans who happen to want to buy Captain Marvel and for some reason just find it more convenient to buy at the Coex since you know, it’s right there. But to each their own.

After this, I would say that the self-tour became a bit lackluster since the next floor was just the museum which you had to pay to get into along with the next floor leading to the theatre which had showings for things like virtual concerts and documentaries. Of course, all SM-related.

I didn’t do any of the activities because again, money, and also because I wasn’t sure if the experience would’ve been really worth the cost, but hey, if I ‘m wrong then anyone who has experienced any of these activities prove me wrong and maybe I will throw away some cash and maybe record a song in their studio or something (…admittedly, I was eyeing that one at least).

Well, there isn’t much else to say about the COEX, if you want a more detailed description of what you can do along with bundles and ticket prices then you can check out their website. This post was just my experience and admittedly, I didn’t try out a whole lot besides wander around and snack on Sulli’s konjac juice, but I hope at the least it was somewhat interesting. At least, maybe the the pictures proved to be pretty to look at.

Ah, well, there is one more little destination that I went to that day. It was Apgujeong Rodeo, where not only are the infamous SM Entertainment and JYP Entertainment are located nearby, but there is also that Gangnam Stardoll street that is home to these about three feet tall dolls decorated in the style of different K-pop groups. Granted, not all groups have dolls on this street, but that’s to be expected when I don’t think they’ve updated the street itself for a few years now. There’s even a shop that sells the dolls, but unfortunately, it was closed when I stopped by. Funnily enough, besides the “Closed” sign, there was another sign that specifically stated they did not sell BTS dolls here, which is a shame if you were looking out for that. Though I can only suspect that it’s BigHit’s doing because they are very protective of their assets boys.

Here’s a few pictures of some Gangnam dolls I actually took pictures of last time I visited the street:

Even that wasn’t enough, for the next day, I went ahead to Myeongdong’s Lotte Duty Free Shopping Center. For those not in the know, Myeongdong is a major shopping district in Seoul for all your K-pop and Hallyu needs. They also have major chain stores like H & M, SPAO, Olive Young, etc etc. You can go broke here especially since if the shopping doesn’t drain your wallet, the dozens of street food venders enticing you with oreo churros or waffles stuffed with ice cream among other things will get you to reluctantly hand over that last 5000 won.

But since Lotte partners up with quite a few idols and because I saw many people swinging around Lotte Duty Free Bags plastered with the members of BTS, I decided to check the place out myself. And sure enough, there was a special tunnel called Star Avenue that led from a part of the main street to one of the entrances the shopping center. Mind you, I’m too dirt poor to buy anything at Lotte considering that they only had brands like Louis Vuitton, Chanel, Gucci, Prada, etc. Hahaha, you must be joking. At least, the interactions with the virtual idols were for free on Star Avenue.

Don’t worry, if you don’t care about BTS, other Lotte stars include: Stray Kids, ITZY, TWICE, and EXO. The last two groups also had their handprints on display within the avenue and I can personally tell you that my hands were all bigger than every TWICE member except Tzuyu maybe. There was also Super Junior who had their handprints on display as well, so do not fret older gen fans, you’re catered to as well.

And that my friends, is all I have for this post. It’s gotten awfully long so I will end it right here. I just wanted to cram all the K-Hallyu related things I did this past weekend.

Okay, well…I suppose I am obligated to say since the past few posts have been BTS-related that while venturing through Myeongdong on Sunday, all I saw was this:

He was freaking EVERYWHERE along with some group called X1 celebrating a debut or something but let’s not mess with groups stemming from controversy and Mnet’s shady handlings now. Thankfully, these banners are somewhat ignorable, if you have tunnel vision or are focused on getting the best deals in Myeongdong, but they can be hard to miss.

Anyways, that is all. I hope this post gave someone out there some entertainment. On the topic of BTS, this past weekend sure led me into thinking that boy, ARMYs really love their maknae, Jungkook. So much so that when one started complaining about beating him up for not acknowledging him (out of love for him, of course. ARMYs would never dare wish harm on their oppars especially at their own hands), he felt obligated to send his love to ARMYs in the form of a song. And that is why he is the lord of this blog, for now, until he is dethroned.

Anyways, remember everyone, to share the love this September and be kind to your idols. Or not, it’s their job to smile through the pain.