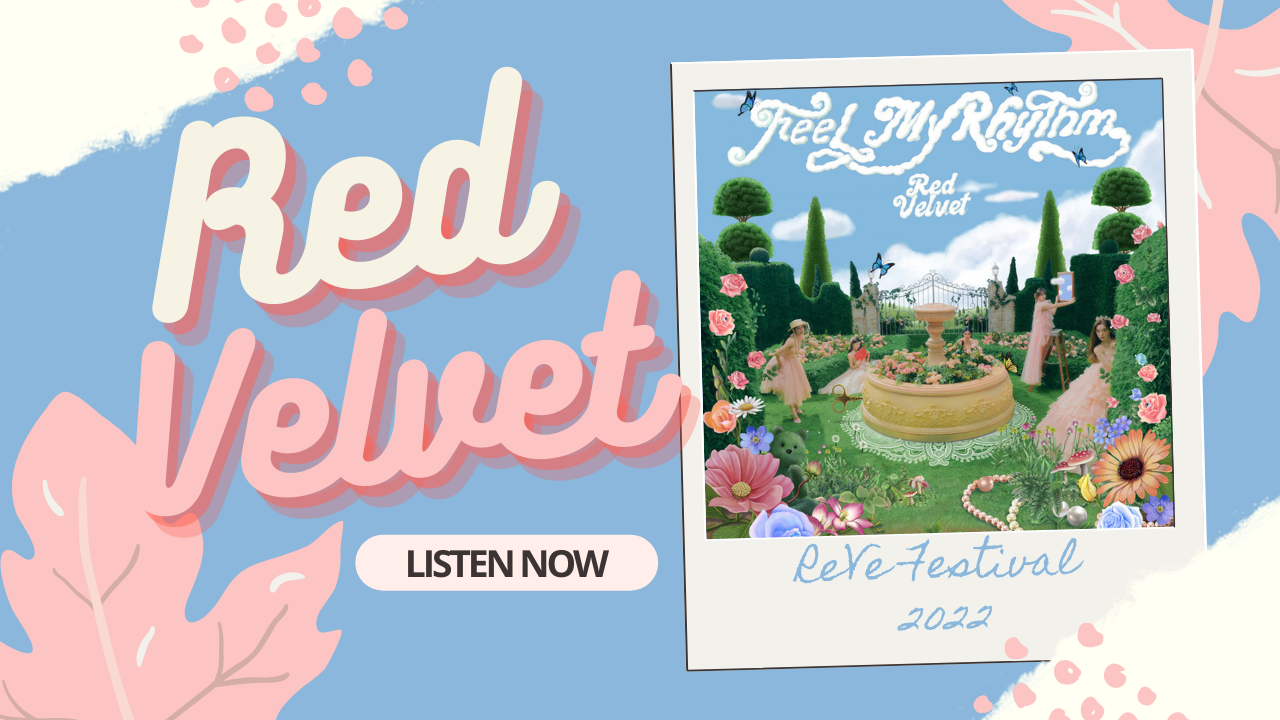 Today’s post will be on Red Velvet’s latest album, The ReVe Festival 2022 – Feel My Rhythm. It has happily revitalized me to K-pop again.

It’s been a while since I have done a review of any sort of this website because lately K-pop has been feeling kind of flat for me. Due to this, I have been writing more for my J-culture site lately. Check it out if you have time. Lately, I have posted a bit on otome games and some old music reviews I did (which I should go back to).

However, you guys came for Red Velvet most likely. So, let’s start! It’s a rather short EP, but there will still be a Table of Contents if you want to skip to your favorite song.

I will be honest, when the song went through its first few bars I wasn’t so sure I’d enjoy it. The classiscal bit in the beginning is fine but when the trap starts I was like, oh boy. On the other hand, my ReVeLuv friend knew it was gonna be a bop once the trap kicked in.

Yet, as the song kept going and hit the chorus, it really started to hit me that I can take the trap since the chorus is quite forgiving. Some people may hate the mix of classical and pop, but I feel if done well can turn a song into a true masterpiece. The classical piece used here is Bach’s Air on the G String. The EP was also purposefully released on Bach’s birthday, so fun fact for you there.

Due to the use of Bach’s wonderful piece, the image of an early Spring is really invoked in the melody of the song. Not to mention the MV is like watching an art student’s final dissertation. A mix of CG and paints help bring together a a carefully crafted music video that isn’t too overwhelming to the eyes.

In addition, I feel like the vocals of the girls really shine through and make the song for what it is.

So finally verdict? I’d definitely add this to my playlist. I might even learn the choreo, too.

The beginning of the stomp stomp clap rhythm that continues as a backing to the main melody until the chorus makes a promising start. This song doesn’t move around as much as “Feel My Rhythm” so once you listen to the first 10 seconds, you basically have the whole song right there.

This can be a bit of a detriment or not depending on what’s your style. For me, I like a bit of a variety in my songs, so “Rainbow Halo” does drag a little tiny bit for me. I still like the song though. Even if the chorus is really just “rainbow halo dance” repeated over and over. I must say, I do like that brass though.

My God, forgive me for I have sinned. In all seriousness though, I feel like this song made me question my sexuality for the umpteenth time in all my years listening to K-pop. I’ll dance for you, work for you and beg for you and I hardly know ya.

Okay, seriously, onto the real review. I think I can safely say this is my favorite song for the album. The song is what others have described as having the Velvet touch of RnB carried along by the alluring and sultry vocals of the girls. The rap isn’t that bad either considering songs like this can be ruined by a poorly placed rap verse.

Seriously, this song will be making you feel rather sensual and bothered by these girls who know exactly what they’re doing. A dangerous track for sure. And yes, this is the only track I left the lyric video for cause you all need to see the lyrics too for the full experience.

(PLEASE SM, let there be choreo for this song or some sort of live performance. I’m actually begging you here.)

Bamboleo stands for “sway,” “wobble,” or “dangle” in Spanish if you were wondering. This song has a sort of dreamy night time vibe to it. It sounds kind of retro as well and weirdly reminds me vaguely (vaguely emphasized) of “Look” another Red Velvet song that carries a retro ’80s vibe to it.

I really like this song too. It’s chill and makes me wanna just lay in my bed at night just dancing away to the melody (all in my head since I suck at dancing, haha).

I don’t have too much to say about this song besides to definitely give it a shot. It’s definitely up there after “Beg For Me.”

Alright, almost to the end so hang on tight since this song my bore the ballad haters to sleep. The song is arguably the more relaxed of the tracks and while the RnB vibes present in the last couple of songs are here – it’s a bit slower than the others. I read a review on the Harvard Crimson about this EP and the reviewer listed this song as “the most forgettable.”

To be honest, I do agree it can be, but I still like this song as well. There isn’t much going on with it. It isn’t trying to be something it isn’t. It’s just trying its best with its little forgettable self. Sometimes it’s the simple melodies that can stick with us and sooth our ears. If it helps, the lyrics ain’t half bad.

And last but not least, “In My Dreams,” which just as the title suggests provides you with more dreamy RnB vibes that wistfully have the girls singing that in their dreams, the listener loves them back. The song feels like it samples a bit from the previous songs from the trap, the leitmotifs to the plaintive vocals and repetitive lines of yearning for the other.

I think when I first listened to this song, it either didn’t make a big expression on me or I just didn’t like it as much as the other tracks. I say this because I wasn’t quite looking forward to listening to this again. Yet, it’s alright. I’d still put it on a playlist with the other songs, but I’m not sure what it is, but there’s something about it that doesn’t click with me 100%

If I ever find out what that is, I’ll get back to you guys.

And viola! That is it. All in all, I have to say that this album brought some hope that K-pop is not a total loss on me. Others may hate this album and that’s cool, but to me, this helped me realise that not all is lost. I’m not the biggest Red Velvet fan, but some of their songs over the years have definitely been as you kids say, “bops,” for me. Maybe I will go ahead and do a throwback post to my first Red Velvet album I fell in love with.

Until then, I hope this review suffices. I have also reviewed other albums like LOONA and Gfriend – other girl groups I don’t follow to closely so you can’t say I’m biased in the reviews!

Alright, until next time – ciao~!