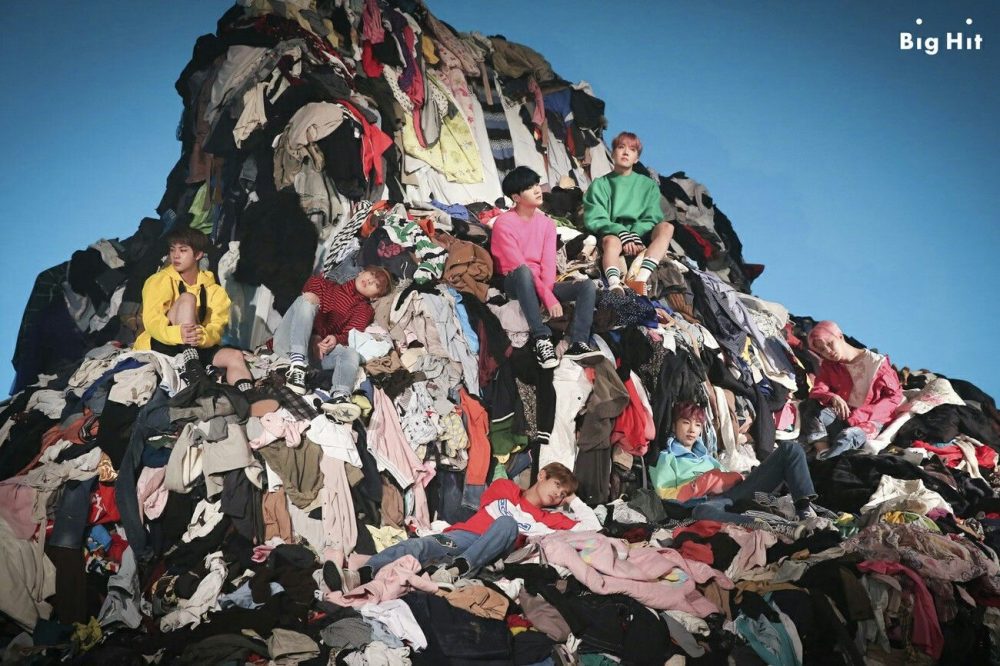 This post has been on the backlog of my drafts for months! Probably reaching a year in a couple months or so. Mainly because I’ve been stumped on how to write this out and other K-pop events and topics got in the way. Anyway, we’re here now, so I might as well do my best to finish this.

About a couple years back, I was able to attend a lecture by a Professor Suk Young Kim of UCLA titled, “Beauty and the Waste: Fashioning Idols and the Ethics of Recycling in K-pop MVs.” It was in this lecture that outlined the industry’s overabundant use of glitzy glamorous fashion that is often tossed away after just one wear hence the term “Kleenex Pop.” This term is describes the rapidity of how idols also come and go in the cutthroat K-pop industry.

Thankfully, despite being ages ago, I kept notes that will aid me discussing why we as consumers of K-pop should be a bit more critical of the clothes worn by our faves.

For the astute K-pop fan, these points are pretty much a given. One only has to look at the careful and meticulous cinematography that goes into K-pop MVs along with all the hard work on set design, directing, choreography, styling, not to mention editing all that afterwards. Then of course you have to pay all those poor people and that leaves a good chunk out of the company’s wallet which I will get to later. But hey, you have an aesthetically fan-pleasing MV where all your faves looks as pristine and dolled up to the 9s and that means profit (or big streaming numbers which is all the rage among K-pop fans these days).

Professor Kim analyzed two MVs during her lecture to emphasize the role of fashion in K-pop:

Both MVs showcase fashion and clothes in different and similar ways. For instance, G-Dragon is known to be a fashion icon in the K-pop world, so obviously he would wear only the good stuff. In a video like ‘Crooked’ where he has multiple costume changes, one has to wonder though, how much does all that cost and where do those clothes go when he finishes wearing them? If you’ve ever internet stalked your faves, you’d know that it is not common to see them where the same clothes as you or I might wear the same t-shirt or pants a handful of times per week or two (especially during this stay-at-home pandemic). Namely, we don’t have that kind of packed closet anyway. However, K-pop idols are similar in a way.

Professor Kim also informed us that the clothes idols wear in MVs, live performances, concerts and the like are usually a one and done situation. She pointed to G-Dragon’s ‘Crooked’ as an example of this as we all know the clothes in that MV are…well, what does happen to them? Sometimes, they are stored away for another day, other times they can are donated (if the clothes were the idol’s personal possession I’m surmising), and sometimes they’re just trashed.

Yes, you heard that right. I actually learned this myself when I searched for more information on this topic, I stumbled across a Forbes article about Burberry, a British luxury designer and I suggest reading it – it’s short. If you don’t want to click the link, it turns out Burberry was busted for literally burning $40 million worth of their products down to ash in order to preserve “product scarcity and brand exclusivity.” Burberry isn’t the only perpetrator as H&M and Nike were also accused of doing similar practices on their products within the same article. The article also mentions that the fashion industry alone contributes 4% of the world’s waste which is about 92 million tons.

Considering that apparently G-dragon had 21 different clothing items and 56 pieces of jewelry thrown on him, you gotta admit that K-pop is definitely a perpetrator to this system.

On the other hand, what was said about BTS’s Spring Day?

Now, either you’ll think Professor Kim is “simping” for BTS too hard or you may think she has a point, but Spring Day rates better in her books.

The professor described ‘Spring Day’ as a contrast to the more fast-paced and quick K-pop MVs we’re used to as the tone of BTS’s song is more introspective exemplified by the soft calming visuals our eyes are treated to as we watch the video. It is well known that this song alludes to the Sewol Ferry Disaster that rocked South Korea back in April of 2014. If you don’t know about it then I would suggest looking it up because it’s an important part of modern Korean history.

Going back to the clothes, however, they feature prominently throughout the video with the culminating moment showing all the members on that huge mountain of clothes.

But wait, aren’t they wasting clothes, too?

Okay, no, but really it’s one way to recycle clothes I suppose since I assume the clothes in that huge pile are old and no longer used. In my notes, I put down the mountain of clothes as representative of the ‘flow of time’ and ‘developmental refugees.’ I’m not sure anymore what I meant by the latter even when I think about it now. Though previously, I had in my notes that the title of the motel found in ‘Spring Day’ is an allusion to a 1970’s story called, ‘The Ones Who Walk Away from Omelas,’ by a Ursula K. Le Guin.

And it is in turn the entire country of South Korea that is being paralleled to Omelas where instead of one child suffering in misery, it’s the Korean youth as a collective. Perhaps, that is what is meant by being a developmental refugee, the clothes are nostalgic of a time long past and the members sitting on that moment are stuck in that time.

But what do I know? Even when theorizing over BTS MVs was all the rage, I never got into it because of how stupid I am.

Oh, but that got a little sidetracked. I wanted to also mention that Professor Kim also emphasized the feeling that inanimate objects within the video were given life. Not personified, but the directorial work and the way the boys handled the objects made it seem as if they were alive or really, given a second chance to live without being discarded.

It may be a stretch to some but it’s food for thought I think. Although, I will say the shoes are important as many a fan as tried to work out what the meaning behind the shoes hung up in the tree by Jimin meant. I mean, I haven’t done in-depth research of the MV so it could’ve been confirmed already, but at the lecture, Professor Kim stated: “The shoes become incorporated into the cycle of life by being placed into the tree.” I also believe I’ve heard that the shoes are representative of the students that passed away in the Sewol Ferry Disaster, but I may be misremembering.

I guess in the end, it’s up to you what to make of all that. Hopefully, this post on clothes in K-pop was something you will think about next time you see your oppar or unnir wear that bling bling Chanel Gucci Burberry t-shirt that cost like $40,000.

At least, you’re not an environmental menace like G-Dragon or a walking fashion faux pas like Jungkook. Celebrities, amiright? But seriously, take care and hopefully this makes you feel better about the 5 pieces of clothing and 3 pairs of shoes you have in your closet.