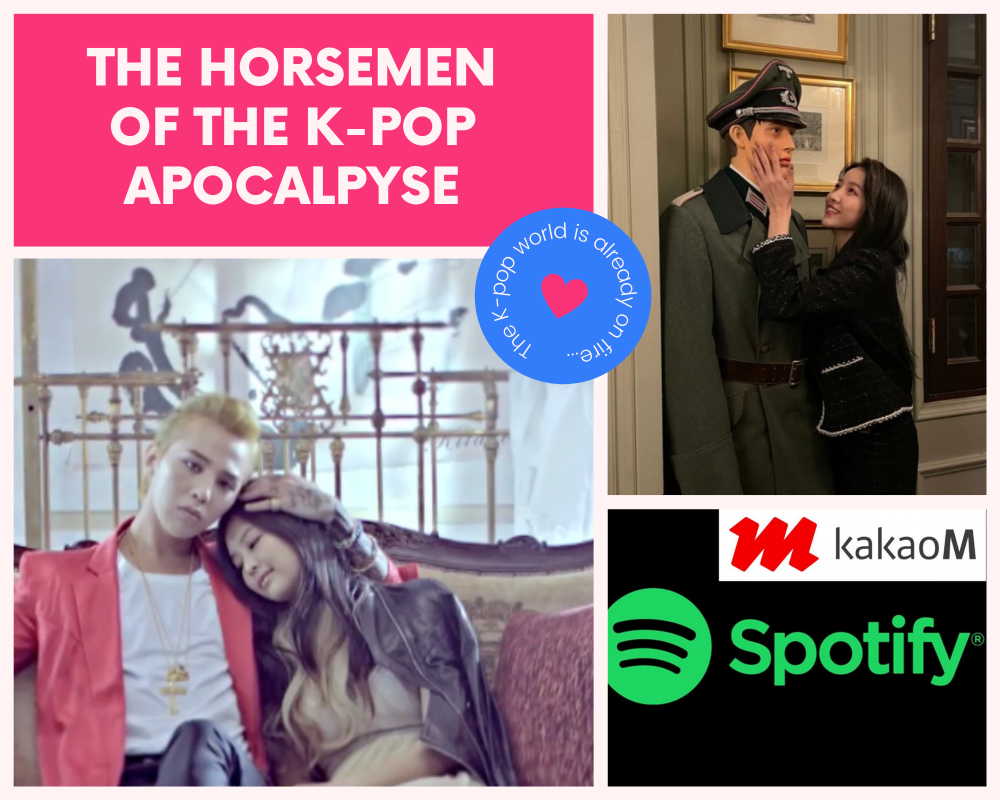 OpinionLeave a Comment on K-pop is a Mess: The Thanos Snap of K-pop Spotify, your fave is possibly a bully, a Nazi sympathiser and/or dating someone questionable

Hey, how’s it going? I’m still technically on hiatus but K-pop news has been slipping into my lap over the past month because you can never truly escape the ever-reaching tendrils of K-pop. Never. Also, it doesn’t help that I browse reddit often and somehow the K-pop subreddit hits the front page here and there. Thus, I have learned about some happenings in K-pop that I kind of wanted to write about.

Contents hide
1 I. Your fave is probably a bully, harasser, or being accused of liking Nazis
2 II. Your fave also got snapped?
3 III. Oh, and your fave may have gotten bored in quarantine and is now dating someone questionable, but what can you do?
4 Related Posts

I. Your fave is probably a bully, harasser, or being accused of liking Nazis

Not a great look admittedly. Though it helped me figure out what to put as the “random K-pop content of the month” on my sidebar in February, so thanks Sowon.

But seriously, what’s the real purpose of this post? No particular reason. I just wanted to write something that wasn’t a “review” because I’ve been away for over a month now with actual content and wanted to also catch up. Like how is everyone? I haven’t been on Twitter since the start of my hiatus and the longer I stay away, the harder it is to go back. This is especially due to the fact that I now post more on Instagram.

Surprisingly, there does seem to be a lot happening in the Kpoposphere. I say this because other times I’ve been on hiatus not much happened. (Although, the Mina and Jimin scandal occurred right before I was going to go on hiatus one time and I did want to write a piece on it that never came to fruition). Apparently, there’s been endless bullying allegations coming left, right, and center against probably many of your faves including: ITZY’s Lia, LOONA’s Chuu, Monsta X’s Kihyun, SEVENTEEN’s Mingyu, (G)-idle’s Soojin, etc. I don’t know the details of any of these cases though I do know that quite a few have already been refuted while some idols have stopped activities until this is all sorted out. I only read about most of this through reddit so even I’m holding a good amount of skepticism over what I’ve read since, you know, other fans aren’t the best source of reliable info even at the best of times.

The only dude that I do know that actually was accused of being a bully and sexual harasser and confirmed that he did it, isn’t even an idol, but an actor by the name of Kim Jisoo.

I’ve only skimmed over what he did back in his school days but trigger warning if you do look up what he did because it’s some disgusting stuff.

With situations like the ones listed above (excluding Jisoo’s), I take the more controversial stance of baring an open mind. It’s disagreeable but most people go by the maxim of trusting and believing the victim first but I’ve read and seen enough of victims themselves turning out to be liars, or even bullies themselves to hold a bit of “let’s wait and see if more concrete/tangible evidence comes out.” Don’t get me wrong, I have fair skepticism of both sides of the story but I’ve become so suspicious of people in general that I don’t like jumping to conclusions so quickly. Obviously, I’m in the minority when I say that it’s possible that the idol being accused can be the victim, too.

Now wait, I’m saying this presuming that he or she is actually innocent. Since we already know and have heard the argument of trusting the victim first…what about the accused? If he or she is indeed innocent, how to go about proving that? Bullying accusations can be a bit hard to prove and seeing the magnitude such accusations carry in an industry such as K-pop, it could stand to reason that someone would be out to topple an idol (I mean, look at Han Seo hee and her friend with Wonho). I do know there are slander laws in Korea and while I need to brush up on what they say, I do know that the way “justice” works in Korea is third-rate most of the time. America does better at times and THAT is saying something especially considering the current climate. People love seeing the suffering and downfall of those the see as being unblemished perfection. While the status of an idol is above that of a normal person, it does not always mean the power of said status comes with it. Idols usually have to acquiesce to society’s demands and perception of what makes an idol an idol. It then does make me wonder how idols who are accused of bullying and have no way to disprove it (if indeed there is anything to disprove) are expected to behave? Has there ever been a case when an idol had to accept that he or she did bully said person even if he or she knew they didn’t? Wouldn’t it look bad if they kept denying it?

Then again, these idols have companies who “usually” back them up (case in point, Taeyong and SM). Then, there are companies who don’t and when the going gets tough, throws away the idol like a rag doll to fend for himself/herself (example, Wonho and Starship).

And again, this isn’t to denounce actual victims of bullying. Nor am I trying to white knight the idols who actually bullied or harassed these poor people. Bullying, ostracization, peer pressure, expectations to be #1 (not do your best, but be better than the rest), and being forced into a collectivist’s mentality is a warped societal pandemic in itself within Korea. I won’t go deep into it here, but from what I read about bullying in Korea, I can’t really imagine the psychological and mental damage that could have on a person years down the line especially if it’s real bad.

I will say though, that there is more than one side to a story and that should be something to keep in mind as we shift through these bullying cases of the present and future.

II. Your fave also got snapped?

Ah, maybe it’s retribution for all these bullying accusations but over the past weekend, a whole bunch of K-pop artists on Spotify got wiped out. So, what happened there?

I won’t lie, while I’m sad to see the blank gaps in my K-pop playlists because I’ve been listening to almost exclusively J-pop this past month or so, I’m not really that torn up about it. Like, I can’t believe that J-pop is actually more readily accessible on Spotify than K-pop right now and this is coming from someone who used to use Limewire to download and burn Japanese songs into CDs. Yes, I’m old.

Evidently, it seems that negotiations between Spotify and Kakao M, now known as Kakao Entertainment (literally changed their name a few days ago – we won’t be fooled!) broke down and are still currently in the works. Spotify is apparently even received a surplus of K-pop fans cancelling their subscriptions to the point that the music service seems to have went down for maintenance at some point.

Okay, but what’s the dealio? Why did talks break down? I don’t know all the details, but you have to understand something here, guys…Kakao Entertainment owns MelOn which is literally South Korea’s largest streaming platform with about 9 million active users (in a country with a population of about 50 million). Obviously holding a monopoly like that is something that Kakao Entertainment doesn’t want to let go so easily despite facing the music streaming giant that is Spotify. For these two entities, it basically boiled down to two points:

It’s obvious just how important Spotify has become in the K-pop community as it has made streaming and listening to your faves easier and allow even nugu groups to be noticed by the ever growing and changing K-pop community. I’ve included a Google doc that includes not only songs that have been deleted off of Spotify but includes those that have returned and how to identify them to add back to your playlists. Bare in mind, of course, that this is an ongoing process so let’s be patient and if you can contribute then by all means do.

Out of curiosity, I did decide to check MelOn out. Just to see how on par it is with Spotify, if it even is. And well, this is what I found:

I logged in through my unused Kakao account and found that I could only listen to songs for a minute before it cuts off. MelOn, unlike Spotify, has no free to listen to option. There are different tiers and choices you can pick from in order to pay for the service. It can be quite a headache if you’re don’t know Korean and have no one to help you. (I didn’t see an English option though it’s possible I overlooked it, but…I wouldn’t be surprised if MelOn shirked it considering this is afterall a Korean service). Although, MelOn does have an English/Global website; however, I do not know if it includes a download to the music player.

Conclusion, I’ll just stick to Spotify – mainly cause I’m biased and most of my J-pop/rock songs are on there anyway. I can live without K-pop…oh wait, this is a K-pop blog, right? Well, I mean…I wish you all luck in finding ways to listen to your faves without too much hassle. May the K-pop gods be with you and let’s try not to grind our teeth to dust waiting to see the outcome of the Spotify vs. Kakao battle.

III. Oh, and your fave may have gotten bored in quarantine and is now dating someone questionable, but what can you do?

I nearly forgot the big news of early last week because a lot really has been happening in the K-pop world – my gosh.

So yeah, apparently Dispatch revealed the two above are dating for about a year now and the K-pop community is tearing at the seams with another bombshell that they have to deal with. Wow, it’s only March…I wonder what else K-pop has in store for us this year?