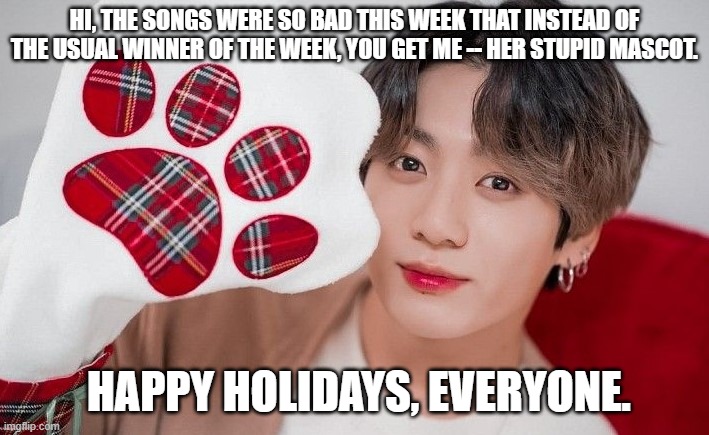 "Reviews"Leave a Comment on 13.12 Weekly “Review” of K-pop but Everybody Hates Christmas

Happy holidays, everyone! I understand that Hanukkah just past so I hope it was a good one to anyone who celebrates that. Anyway, I didn’t stream this week, but I wanted to do my best to still get this out on Sunday. As a remainder, this month is a bit crazy for me, so streams are pushed back to Saturdays instead of Fridays, so my reviews in turn are pushed back a day, too. I HOPE to get back on schedule in January. Let’s cross our fingers.

So, I heard through the grapevine that K-pop releases slow down in December or overall just suck but since it’s my first time reviewing December releases, I decided to give some of them a shot.

This song tries to back a punch but falls a bit flat for me. I think I will enjoy dancing to it though…if I ever get back to doing those mirrored K-pop dance compilations.

I like this song a bit more from the first listen. Though it makes me wonder what happened to such hits as “La Vie en Rose” or “Violeta”? Also, how much time do these girls have left anyway?

I got to about the minute mark before I just started laughing. That’s all.

Ah, ONEUS’s brother group, if you didn’t know. I swear, RBW sure has diversity in their groups, you gotta admit but as you can tell, I’m not a ONEWE fan and apparently so are a lot of people because they sure aren’t as big as ONEUS. I like the band concept, I always appreciate that but Korean pop idol bands never seem to go in the direction I like. This song be a 4 or 5 on my scale.

GHOST9 is one of the “4th gen” groups that debuted with an alright sounding name which is rare when you got boys groups called “Drippin,” “BAE173,” “Cravity (cavitiy?)” and for girl groups – “AESPA” (talking more about the acronym), “Bling Bling,” and “STAYC” (I just think of the name Stacy). But Jesus…their kinda cool sounding name ain’t living up to their music. C’mon GHOST9, give us something more.

I actually like a good chunk of Yerin Baek’s stuff. I listened to her during my depressive week cause I just wanted chiller, pensive sounding songs. This one has a hypnotic almost club-sounding vibe. I don’t think this is one of my favourite honestly.

Also, where do they find these foreigners to be in these MVs? I…may be interested…

Know this guy from the drama, Hwayugi, which I really liked at the time, though not sure about now. Anyways, song is…actually kinda boring. I won’t lie. It’s just, I feel I’ve heard others like it, so it’s nothing special.

Kinda boring, too even with the “suspenseful” MV.

Coffee shop music – that’s all I could think about as I listened to it.

I have to admit, I like the sound of their voices together though I’m not sure I’d revisit this song, but it’s not totally awful or boring despite the opening being a bit dull.

That latino sounding guitar in the beginning can’t save this song. It picks up after a minute but it’s not enough for me to stick around. I like her enthusiasm though.

Again, I know some Korean. I ain’t a looker but maybe, just maybe you guys can still hire me? I need the money.

I just added this in because I was curious how a song called, “Jamie Cullum” would sound. Who’s Jamie Cullum? I looked it up and Wikepedia says, “Jamie Cullum is an English jazz-pop singer-songwriter and radio presenter.  Although primarily a vocalist and pianist, he also accompanies himself on other instruments, including guitar and drums.”

So, I guess we can see the influence in this MV. To be honest, I like the piano – won’t lie, but the song still isn’t quite there for me.

Bloody Christ, I hate WordPress sometimes. This video took SEVERAL attempts just to paste in here. Maybe WordPress was trying to tell me something because I’m not sure this song was worth the frustration.

This is an interesting one. if it looks like it was made back in the early 2000s…you’re not entirely wrong. I saw a live performance this band did of the song back in 2004! But 1theK put up this MV just days ago, so…I don’t know. Anyway, I just kept it in just in case anyone wants to check out a rather old Korean poppie song.

These folks came out with THREE songs this past week and curiosity got the better of me. This one is kinda cute but meh.

I mean, this isn’t my vibe but they seem to be having fun, I guess so good for then. Though this song is kiiiinda nice.

Here’s the long awaited Christmas section! If you got this far, then you can withstand probably the millionth and one Christmas song you’ve probably heard this month.

This ain’t it, chief. Fans will love it, of course. Also, every time I these guys, I can’t help but remember one of them is a no good bully.

The Banhana girls are back but only to collab with a kids show so of course, the song is toned down for the kids. Also, if it’s a K-pop song I can actually understand like 80% of it, then yes, it’s that simplistic.

Very Christmassy so if you hate Christmas songs…then why are you here?? I don’t mind it too much but it’s not my favourite type of Christmas song.

Dude already looks depressed as hell in the thumbnail so I hesitated to click play. He starts off by saying in English, “I love Christmas time” and I don’t know why, but that turned me off so quick.

Ballad-style Christmas song, but not my kinda ballad.

At least this is a bit less sad sounding as the song above but golly, still feeling indifferent towards this one. Nice voices though.

I feel like when they open up on the singers on a couch like this, the song ain’t gonna be stellar. It’s not bad but boy, the guy, DinDin I’m guessing, really doesn’t look like he wants to be here. It may be subtle for some, but he’s definitely just seems to be there for the paycheck…or maybe he does’t know how to act all bubbly and full of jolly in these Christmas videos.

On the other hand, close ups of their camera smiles and happy faces unsettles me on a uncanny valley level, so maybe DinDin had the right idea looking as apathetic as he did.

Budget MV in the house cause you and your peeps can’t go no where cause of COVID. Apparently Korea is hitting a spike in cases recently. Stay warm and safe everyone.

Ya boi is back in time for the season, too. Hmm, I wonder if any K-pop idols know about him at this point? The real question is: Does Jimin (BTS) know about him by now? Will we ever know? I can’t die until I find out.

Okay, let me leave off with something that might cleanse your eyes and ears. Well, this depends if you like high-pitched kids singing about Christmas.

Anyways, I’ll be back next week, so take care until then all you beautiful people – oh wait, I think I just stole some YouTuber’s line. Then, have a good wonderful week, you crazy kids.

I really don’t know how to sign off these posts – honestly.